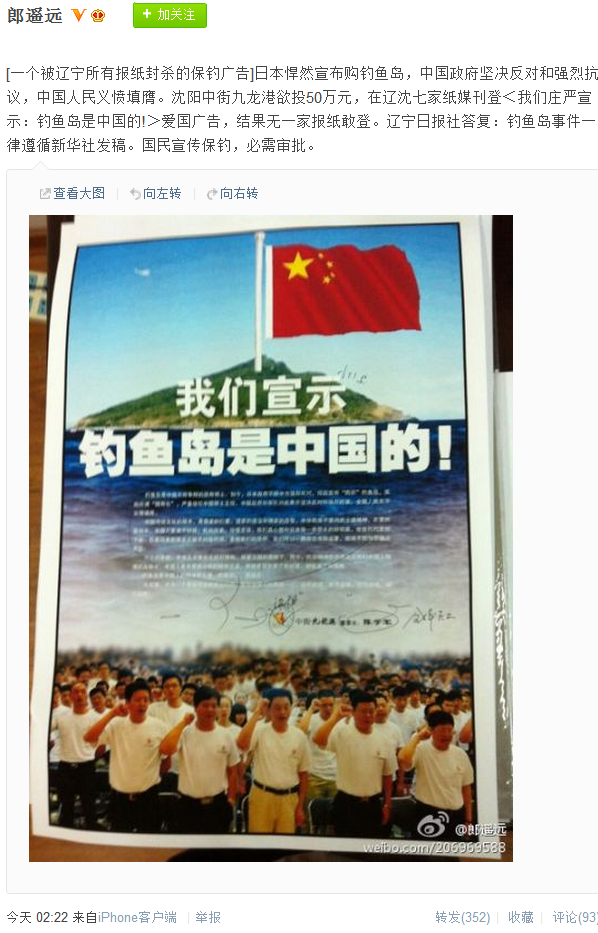 Last week, writer Lang Yaoyuan wrote on his verified Sina Weibo account that not a single publication in Liaoning Province dared publish a citizen-produced “protect the islands” advertisement. The Liaoning Daily explained that it “must thoroughly adhere to Xianhua News Agency’s manuscripts.” Many netizens complained, “Even patriots have to be examined and approved.” Others joked that “the facts prove the Diaoyu Islands belong to Xinhua.”

LangYaoyuan: Liaoning Papers Censor Ad: The Chinese government objected and the Chinese people protested after Japan brazenly announced its purchase of the Diaoyu Islands. Kowloon Harbor, a business on Shenyang’s Middle Road, invested over 500,000 yuan in seven print media journals in the city to publicize that “the Diaoyu Islands belong to China!” Yet not a single Liaoning newspaper published the advertisement. The Liaoning Daily explained that it “must thoroughly adhere to Xianhua News Agency’s manuscripts.” If the people publicize the message to protect the islands, the government must examine and approve that message.

DiYa: The facts prove the Diaoyu Islands belong to Xinhua and to the Party. They have nothing to do with the rabble.

GuilinDailyLaoNa: Even patriots have to be examined and approved…

tigerfishhome: P people should get out of the way and let Party members go first. At the critical moment, 80 million Party members will boldly move forward.

insider_outsider: Whether that ad gets published or not, they still get off. Did you see that full-page spread in a Russian paper declaring “the Kuril Islands are Russia’s?” They printed a photo of their president standing on one of the islands. Actually, my biggest question is, who in China owns the Diaoyu? It certainly isn’t me, and it certainly isn’t you. Maybe it’s “the people.” Seeing people who don’t have any property rights get this worked up makes me think they’re a little sick in the head.

anqieluodi: Idiots! Go publish your ad in the U.S. Go say the entire Asian continent has been China’s since time immemorial. Find something cheap so you can print more copies, heh! Don’t lose your pretty little face…