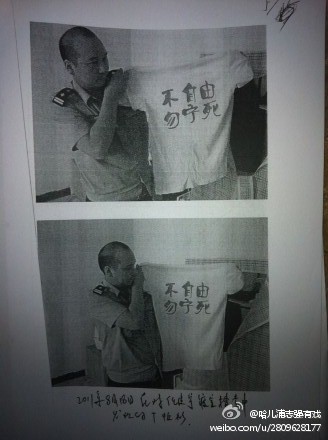 Incriminating? T-shirt proclaiming “Give me liberty or give me death.”

HuXijin: I hope the long-term impact of the Ren Jianyu case in today’s Internet age is the establishment of precedent that will end the political and cultural tradition of the  “criminalization of speech.” Political speech and the propagation of [other’s] speech which does not infringe upon the rights of others and does not precipitate concrete action should not be criminalized. In other words, if “comment deletion” must continue for a time, then a resolute end should come to the “criminalization of comment posting.” This is a key pathway to achieving a higher level of free speech.

Ren Jianyu, a young village official in Chongqing, was sentenced to two years of re-education through labor last August for reposting critiques of Chongqing officials on Weibo. This was just months before Chongqing Party Secretary Bo Xilai’s protracted fall from grace. Authorities claimed that T-shirts found in Ren’s apartment emblazoned with the slogan “Give me liberty or give me death” (不自由，毋宁死) proved his intent to stage a coup. Ren was released early from detention on November 19.

Hu Xijin, known as a Party apologist, has been notably outspoken in defense of Ren. He wrote a weibo in this vein in October, before Ren’s appeal court hearing (translated by Tea Leaf Nation):

HuXijin: The appeal hearing of Pengshui University student village official Ren Jianyu’s sentencing to re-education through labor for Weibo retweets has begun. I believe he’ll win. Because [what he did] didn’t harm any individual person, and it was pure speech that didn’t create any social conflicts–the era when these kinds of commentary could be punished for being ‘against the Party [or] against socialism’ needs to come to a thorough conclusion. I hope that when this case is rectified, it will [cut down] the last straw of a thousand-year political tradition of criminalized speech. China needs to move forward.”

But netizens shouldn’t get too excited about this about-face. As @waynebabywang (@韦恩卑鄙) points out, Hu still supports censorship through deletion of offending posts. Could it be that Hu thinks this is necessary in a slow move towards real freedom of speech, or merely that he opposes violent punishment for speech “crimes”? Even if Hu does advocate for eventual freedom of speech, he won’t touch the core problem. @yrjang says it right, “ If there is no check on power, sooner or later we’ll backtrack.” Indeed, just one week before Ren’s release, another netizen was arrested for his activity on Twitter, beyond the Great Firewall but not the reach of the police.

CDT Chinese has collected some of the comments Hu received:

WhiteRiverFishForMen: Is Chief Hu experiencing temporary consciousness? Regardless, you have to give him credit for this one.

yrjang: Keep dreaming. If there is no check on power, sooner or later we’ll backtrack.

kejinjin: Certainly, I must have opened up my weibo incorrectly or something. This can’t be Hu Xijin, right? His account must have been compromised.

BlueDanube01: Heh heh, you can see which way the wind is blowing from Editor Hu’s weibo.

UnoilyRapeseed: I support this! Re-education through labor must be abandoned!

EternalFatLegEra: Editor Hu, what happened to you? Could it be that political reform is actually on its way?

HappilyTravelHorizon: I applaud Chief Hu this time. Freedom of speech is a legal right of all citizens, given to us by the constitution. It’s written down on paper.

Cadenza: I bet the central authorities had you test water for them, right?

Silentcnm: Did he give his password to someone else?????

HappyEarthlyPerson: Now this is a humane thought! Reposting. Could it be that Chief Editor Hu is a moral bisexual?

MESSIAH-: He’s moving faster than the higher-ups. Isn’t he afraid of being criticized?

waynebabywang: He’s just kissing ass in a new way. He still mentioned that comments will continue to be deleted, and there’s nothing you can do about it.

Westernwuhuapiao: A Nobel Peace Laureate is still in prison