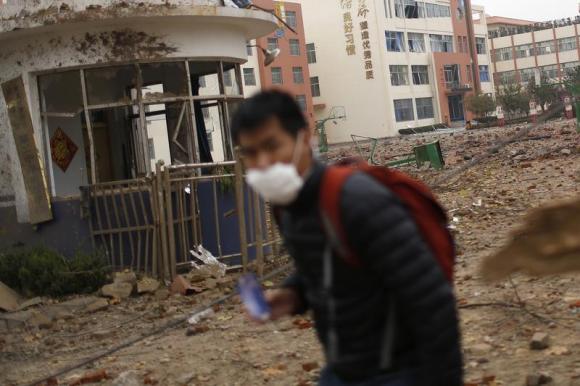 The Wall Street Journal’s Wayne Ma reports that 43 people have been disciplined following an investigation into an oil pipeline explosion that killed 62 in Qingdao in November. A further 15 people face criminal charges.

Xinhua said the 48 people received a range of disciplinary measures. Fu Chengyu, the chairman of China Petrochemical Corp., or Sinopec Group, and Qingdao’s mayor both received administrative demerits, according to Xinhua.

In the past, many Chinese officials who have received such demerits have continued to rise in the ranks.

[…] In 2011, the State Council issued similar disciplinary warnings to 64 people responsible for four accidents at state-owned China National Petroleum Corp., the country’s largest energy company. Jiang Jiemin, CNPC’s former chairman, was among those disciplined for the accidents, which included a pipeline explosion in the port city of Dalian that didn’t result in casualties. Mr. Jiang was promoted two years later to head a government commission that oversees state-owned companies. [Source]

Jiang has subsequently come under investigation for “disciplinary violations” probably involving corruption, a development believed to be part of a campaign to isolate former security tsar Zhou Yongkang before targeting him directly on similar grounds.

Chinese media were ordered in November not to speculate on responsibility for the disaster, while Qingdao Party chief Li Qun pledged to “scour the country” for people spreading rumors about the incident.

Ma and Carlos Tejada had previously reported on the explosion probe’s findings on Thursday. From The Wall Street Journal:

Huang Yi, a spokesman for the State Administration of Work Safety said at a news conference that the initial oil leak at the pipeline wasn’t properly inspected and that both the pipeline’s operator and local government departments bore responsibility for the explosions. Mr. Huang said the initial emergency response was “inadequate” and that workers on the scene failed to detect lingering oil and gas in the eight-hour period between the initial leak and the explosions.

[…] Mr. Huang said the accident caused a “direct economic loss” of 750 million yuan ($124.9 million) and added that pipeline corrosion allowed oil to leak into the sewage network under one area of the eastern Chinese city. He also said workers on the day of the incident were using a hydraulic hammer that wasn’t explosion-proof, resulting in sparks that triggered the blasts. [Source]

Investigators found that the causes of November’s accident reflect widespread hazards in China’s oil and gas sector. From Judy Hua and David Stanway at Reuters:

“Oil and gas pipelines are buried underground… It is hard to inspect (them) and find the hidden dangers,” said Wang, adding that the agency had already urged the parties involved to fix the problems.

China has 655 trunk oil and gas pipelines with a total length of 102,000 km. Some of them have been operating for as long as 40 years, making them vulnerable to corrosion, Huang Yi, a spokesman for the State Administration of Work Safety, told a news briefing.

“What worried us is that some oil pipelines overlap with urban infrastructure pipes, causing many hidden dangers.” [Source]