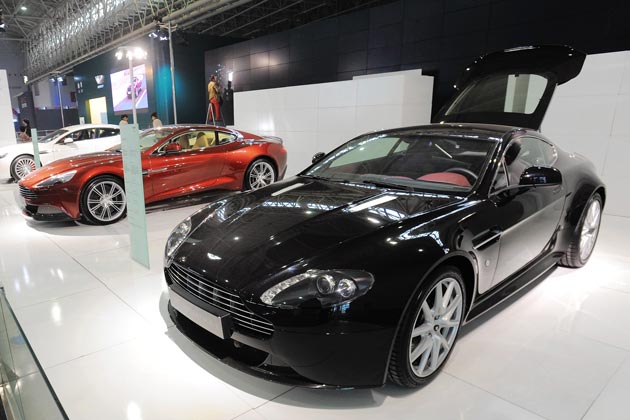 Luxury sports car manufacturer Aston Martin is recalling more than 5,000 cars after uncovering that its throttle pedal arms were made with counterfeit materials from China. From Bloomberg Businessweek:

The luxury sports cars’ throttle pedals are assembled in Swindon, England, by a company known as Precision Varionic International, which in turn gets its parts from Fast Forward Tooling in Hong Kong. In this case, Fast Forward Tooling subcontracted the molding of pedal arms to Shenzhen Kexiang Mould Tool Co., which bought its allegedly “counterfeit material” from Synthetic Plastic Raw Material Co. in the Chinese factory town of Dongguan. And apparently, James Bond’s gadget man Q was not on hand to inspect quality.

Aston Martin’s “engineering specification require pedal arms” to be made from a specific plastic supplied by DuPont (DD). Some cunning folks at Synthetic Plastic Raw Material had in fact been allegedly shipping out materials “in bags labeled as DuPont PA6,” but those bags actually contained an inferior imitation plastic. [Source]

FT reports that although no accidents have been ascribed to the glitches in the accelerator pedals, Aston Martin issued the recall out of safety concerns.

Aston Martin said it was recalling the cars because the pedal was not safe, though no accidents have been blamed on the fault.

Shenzhen Kexiang Mould Tool used counterfeit DuPont plastic when manufacturing the pedal arm, the carmaker said, adding that it would shift production of the part back to the UK as a result.

The plastic used in the manufacturing of the pedal was not of industrial quality and as such could break under force.

“If the accelerator pedal arm breaks, the engine will return to idle and the driver will be unable to maintain or increase engine speed, increasing the risk of a crash,” the US National Highway Traffic Safety Administration said in a statement. [Source]

Meanwhile, 14 Chinese suspects have been arrested in Italy for selling counterfeit cashmere clothing that contained rat fur. More than a million garments have been seized by Italian authorities. BBC News reports:

The Chinese-born suspects were arrested in the Italian cities of Livorno and Rome after a year-long investigation, and have been cautioned for fraud, the Italian news agency ANSA reports.

The clothes claiming to be made of cashmere contained a mixture of acrylic and viscose, as well as “fur from rats and other animals”, judicial sources say. Bogus merino wool, silk and pashmina garments were also seized. [Source]

Tesla Full Speed Ahead In China

Quote of the Week: “Ma de” in China