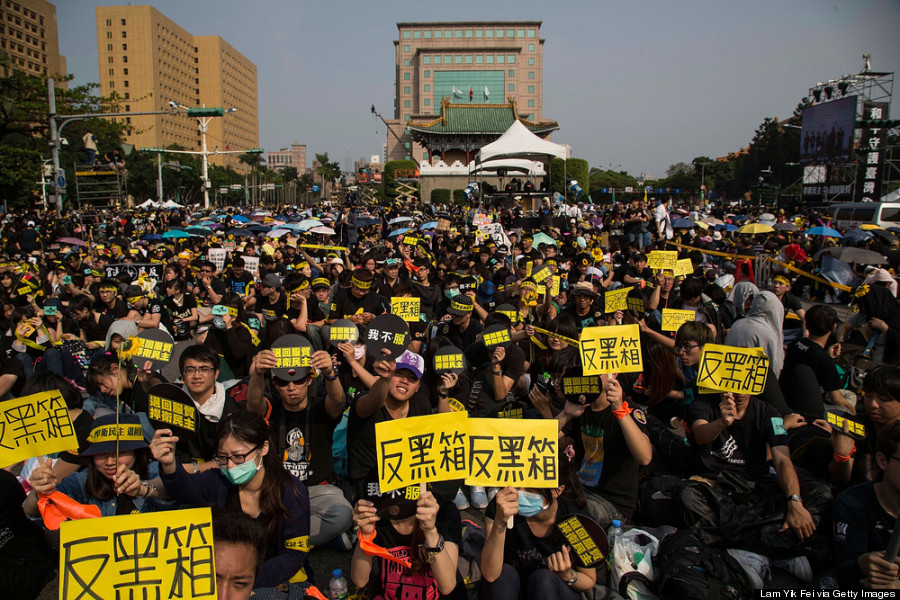 As promised late last week by student leaders of ongoing demonstrations against a trade agreement that would open Taiwan and China’s service industries to cross-strait investment, a massive rally took shape in Taipei over the weekend. Reuters reports:

Protesters say the deal to open 80 of China’s service sectors to Taiwan and 64 Taiwanese sectors to China was rushed through, and could leave Taiwan increasingly beholden to China’s Communist Party leaders.

[…] A coalition of student and civil groups behind the demonstration said that around 500,000 people had massed in streets near the Presidential Palace and the parliament building that has been occupied by protesters for nearly a fortnight.

[…] “We will not back down,” Lin Fei Fan, one of the student leaders behind the occupation of Taiwan’s legislature, told Reuters inside the building. “The large turnout today shows there is a clear majority in Taiwan that demands President Ma address our concerns in an acceptable manner.” [Source]

Also see a collection of images of the March 30 demonstration from the Huffington Post.

On March 18, students and activists stormed the Legislative Yuan, Taiwan’s parliament, barricading themselves inside, where they still remain. On March 23, protesters’ attempts to occupy the Executive Yuan, the ROC cabinet offices, were thwarted in a police crackdown that left many injured.

Protesters have been expressing concerns about the Cross-Strait Service Trade Agreement (CSSTA), a pact many fear would allow increased economic ties to be used by China for political influence on the self-governed island over which Beijing claims sovereignty. When the CSSTA was signed in June of 2013, public concern led the ruling Kuomintang Party (KMT) to agree to public hearings and a clause-by-clause review. After the KMT forced the pact through the legislature earlier this month without the agreed upon review, the ongoing series of protests began. They have collectively become known as the Sunflower Student Movement.

After more than 100,000 gathered for last weekend’s rally and as those in the Legislative Yuan finish their 15th day in occupation, a report from the Wall Street Journal notes that “few have been as surprised by the movement’s staying power and popular support as the student leaders themselves“:

“Our thought at the beginning was very simple, that we wouldn’t last for a night before the police forced us out. We thought they would take us out by force. But later it turned out this didn’t happen,” said Lin Fei-Fan, one of the organizers. “The first day we took over the legislature, there were four attempts to evict us, but we held our ground.”

Mr. Lin, a 25-year-old political science graduate student, and Chen Wei-ting, a 24-year-old graduate student in sociology, are the key leaders in the movement. They have been credited for bringing discipline to what their detractors have called an undemocratic mob. Their articulate criticisms of the pact have swayed the public. […] [Source]

Mr. Lin has emphasized the importance of maintaining hold of the Legislative Yuan, the movement’s “biggest bargaining chip.” In an interview with the Wall Street Journal’s China Realtime Report, Mr. Lin discusses the ongoing occupation, and explains his view of the CSSTA and cross-strait trade in general:

[…] Why do you oppose this service trade pact?

Because of procedural reasons and because of the content of the pact. For the procedure, when the Ma administration signed the agreement, President Ma didn’t consult members of these industries and regular citizens. After it was signed and sent to the legislature, they said under pressure they’d hold public hearings. But after the public hearings, they didn’t review the pact line by line. They just passed it suddenly after 30 seconds of review. So we absolutely oppose it based on procedure. Without procedural justice there can’t be real justice. For the substance of the pact, we can see it would hurt a lot of sectors, including for a lot of young people. Out of the more than seven million people in Taiwan’s service industry, a large percentage are young people.

Are you against this specific pact, or against increased trade in general between China and Taiwan?

We definitely aren’t against more trade flow. But for every trade pact, every country’s FTA (Free Trade Agreement), we have to see what the specific details are, what sectors are opened and what you are giving up. Are the gains worth the costs, and are the gains shared by the people, or by certain business interests? If it is that kind of free trade agreement, I will oppose it. If it is a very fair free trade agreement and the gains are shared among the people, then there’s nothing wrong with that. This trade pact will not achieve it. Also, signing a trade pact with China has very high [political] costs for Taiwan. [Source]

For more on the Sunflower Movement, including mainland denunciation of the chaos that comes with democracy and netizen criticism of Hong Kong and Taiwanese celebrities who have shown support for the protesters, see prior CDT coverage.