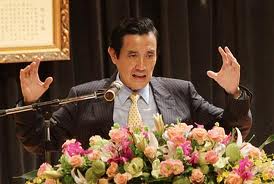 In March of this year, student protesters occupied Taiwan’s Legislative Yuan to express concerns about encroaching mainland influence allowed by President Ma Ying-jeou and his ruling Kuomintang Party—concerns which boiled over after the Cross-Strait Service Trade Agreement was passed without an agreed upon review. Six months later, students in Hong Kong began their ongoing occupation of main thoroughfares to protest Beijing’s limitations on candidate nominations in upcoming regional elections. President Ma, who has done much to deepen ties with Beijing during his six years in office, has been continually voicing his support for the Hong Kong protesters and their cause over the past two months. Last Friday, the New York Times quoted President Ma again offering protesters in Hong Kong support, outlining the benefits of greater democracy in the mainland, and explaining his logic in supporting Hong Kong protesters now while opposing Taiwanese protesters last spring. Keith Bradsher and Austin Ramzy report:

“If mainland China can practice democracy in Hong Kong, or if mainland China itself can become more democratic, then we can shorten the psychological distance between people from the two sides of the Taiwan Strait,” Mr. Ma said in an interview at the presidential palace here.

The president’s public pronouncements on the Hong Kong protests — he also expressed support for them in a televised speech on Taiwan’s National Day, Oct. 10 — show a greater willingness lately to speak out on a delicate issue for the Chinese leadership. But Mr. Ma was quick to point out that he had issued an annual statement to mourn the Tiananmen Square crackdown in 1989, and that China had not made those statements an obstacle to improving relations.

[…] Mr. Ma drew a distinction between his support for the protests in Hong Kong and his condemnation of student protests in Taipei last spring that indefinitely delayed one of his free-trade agreements with the mainland.

He suggested that the protests in Taiwan, involving the temporary seizing of the legislature and the main government office building, had been more violent than the demonstrations in Hong Kong, where the authorities contend that protesters had kicked police officers and poked them with umbrellas.“There is absolutely no contradiction, as I support democracy but oppose violence,” Mr. Ma said. […] [Source]

Dozens of Taiwanese “Sunflower Movement” protesters’ were injured in skirmishes with security forces, much as we have seen recently on the streets of Hong Kong.

In an interview with the Global Post’s Benjamin Carlson, President Ma Ying-jeou defends his pro-Beijing policies, explains why Taiwan should continue increasing ties with the mainland, and reiterates his support for the Hong Kong protest movement:

While admitting that Xi Jinping had “maintained a somewhat high-handed posture” toward Taiwan, Ma said that the island should maintain the current pace of increasing links with the mainland. He expressed cautious hope that increased contact with Taiwan could demonstrate to mainland Chinese the possibility of democracy in an ethnically Chinese context.

[…] “We have never wistfully thought that mainland China would become democratized quickly,” he said. “All our efforts in Taiwan have aimed at showing ethnic Chinese societies around the world that the imported concept of democracy can take root, germinate, and grow into a big tree on purely ethnic Chinese soil. This is a very important reason for our existence.”

[…] Asked about the protests in Hong Kong, Ma reiterated his support for the democratic movement, while rejecting parallels between Taiwan and the former British colony, which was returned to Beijing’s control in 1997.

“The people of Taiwan have been paying close attention to the developments in Hong Kong, not because they believe that Hong Kong’s situation has any relevance to Taiwan, but because they want to see whether Beijing will honor its initial promises. Taiwan and Hong Kong are completely different cases, so we do not fear that Taiwan will become a second Hong Kong”

While the situations are certainly different, Ma’s confidence belies the delicacy of Taiwan’s position. […] [Source]