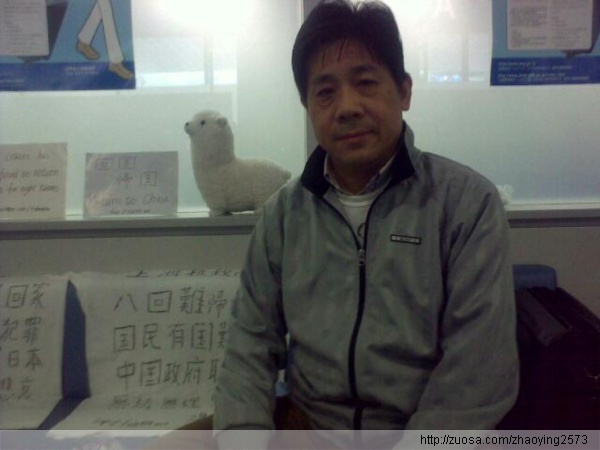 After he was denied re-entry to China eight times, Feng Zhenghu lived in Tokyo’s Narita Airport for 92 days in 2009-2010. Now Feng is telling the story of his airport odyssey on his blog, and CDT is translating his account. This is the eighth installment. Read previous installments here: This evening, a middle-aged man who worked at the Japanese immigration checkpoint left another bag of food at my encampment when no was looking. Also in the bag was a note letting me know that he would return on November 14. (At the designated time, he once again snuck a bag of food to my camp. The bag contained sandwiches, bread, and other fresh food. He later told me that he learned about my situation on the Internet.)

I already considered this man a trusted friend. We first met on the evening of November 8. I was sitting on the ground typing on my computer when he quickly walked past me and tossed me a roll of chlorophyll gum, saying “ganbatte” (keep fighting) before walking away. I immediately thanked him.

I’m so grateful to this Japanese man, previously a complete stranger to me. He gave me more than just food. His kindness sustained my good feelings toward Japan. Like my younger sister’s husband, he is a kind-hearted person with a sense of justice. The friendship spoken about by the Hatoyama government is nothing but empty words. But the friendship of these everyday Japanese people is real. The governments of China and Japan will continue to fight, but the peoples of these nations will not be fooled–we will remain friends.

It just so happens that a Chinese student from Tsinghua University was interning at All Nippon Airways. She saw my situation and heard that I hadn’t eaten in many days, only having water to drink. She felt bad, so on this day, she broke company regulations and snuck a bag of sandwiches to my encampment. I thank this college student. Like the many high school and college students who had been sending me text messages, she is someone who has ideals, love, and a sense of responsibility. These young people are the hope of China. [Chinese]