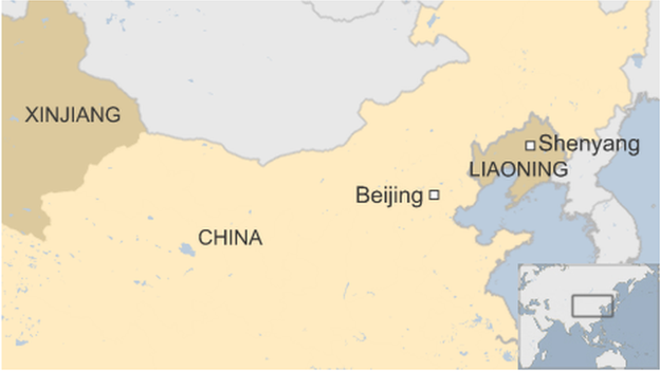 The BBC reports that three men allegedly armed with knives were shot dead and another woman injured in a raid in the eastern city of Shenyang on July 13. Sixteen others, referred to as “terror suspects,” were detained, as was a 28-year-old Uyghur woman and three children:

During the raid, officers entered a rented apartment where they “discovered Xinjiang terrorist suspects” and were attacked by four people “wearing headgear, holding long knives, and shouting ‘holy war’ slogans,” the statement [by the Liaoning government and reproduced by state media] said.

Police then retreated and called for back-up. More than 200 officers, including an anti-terrorist unit, evacuated nearby residents and surrounded the building. A cherry picker was used to reach the seventh-floor apartment.

[…] Police then retreated and called for back-up. More than 200 officers, including an anti-terrorist unit, evacuated nearby residents and surrounded the building. A cherry picker was used to reach the seventh-floor apartment.

Pictures of the raid posted on a Weibo account owned by state broadcaster CCTV showed armed, uniformed men stationed on a rooftop and in a cherry picker cabin. [Source]

The official statement from the government of Liaoning tying the alleged terror suspects to Xinjiang, as well as many Chinese news reports citing it, have since been deleted. The Wall Street Journal’s Chun Han Wang and Olivia Geng report:

At least four Chinese media outlets—a state-run news agency and three commercial newspapers—published reports late Monday saying police in the northeastern city of Shenyang had shot dead three “Xinjiang terrorists” and wounded a fourth during a counterterrorism sweep in the city, which is the capital of Liaoning province. They cited a purported Shenyang police statement, images of which were posted on a verified microblog account run by provincial propaganda officials.

But many Web-based versions of these news reports, which also appeared in print, became inaccessible by midday Tuesday, while the original microblog post was nowhere to be found.

[…] This statement and its contents were reported by the state-run China News Service, as well as three leading commercial newspapers—Beijing News, Beijing Youth Daily and Shanghai-based The Paper. A person at Beijing News said censors had requested the newspaper to remove its online report that cited the police statement. However, copies of these reports reproduced by other online news outlets remained available as of Tuesday afternoon. [Source]

In response to an escalation of deadly incidents blamed by authorities on Uyghur separatists and religious extremists from Xinjiang, an ongoing, nationwide “war on terror” was launched last May. While the vast majority of violence has occurred in Xinjiang, several incidents have taken place elsewhere in China: In March 2014, dozens were left dead at a Kunming railway station; In May 2015, several were injured by knife-wielding attackers at a Guangzhou railway station; last month, a Uyghur man was reportedly shot dead at a Xi’an railway station after attacking customers with a brick—in this case, an official Weibo post identifying the man as a Uyghur was removed.

Amid the terror crackdown, Beijing has closely managed the media narrative on Xinjiang and related violence by issuing censorship directives and limiting reporters access to scenes of violence and unrest. With a lack of independent reporting on incidents, foreign reports often cite information from advocacy groups and foreign government-funded media outlets.

AP’s coverage of the Shenyang raid quotes a World Uyghur Congress spokesperson who claims that the suspects shot and detained Monday were among many others attempting to flee China:

Dilxat Raxit, spokesman for the Munich-based World Uyghur Congress, which advocates Uighur rights, said that according to local sources, the suspects shot Monday were among dozens of Uighurs who had been rounded up and arrested as they were trying to flee abroad through China’s northern border.

“China shot dead those who resisted,” he said. “China’s barbarian policy of shooting people dead before judicial interrogation should be prevented by the international community.” [Source]

While rights groups, advocates, and reporters who have spoken with Uyghurs who have successfully left China see attempts to flee rooted in a desire to escape violence and repressive policies in Xinjiang, Beijing has claimed that a many detained would-be escapees were in fact trying to access jihad training camps in the Middle East. After Thailand’s military government forcibly extradited 109 Uyghurs to China last week, foreign governments and international rights groups voiced concern. The Sydney Morning Herald reports on recent state media claims that the extradited Uyghurs were on their way to “join jihad,” and resounding concerns from rights groups about their fate:

Citing the Ministry of Public Security, China’s official Xinhua News Agency said on Saturday the 109 Chinese “illegal immigrants” had been on their way “to join jihad” in Turkey, Syria or Iraq, and that 13 of them had fled China after being implicated in terrorist activities. Another two had escaped detention, the report said.

Another spokesman for the group, Dilxat Raxit, said China was “shirking responsibility for Uighurs fleeing because of its policy of suppression”.

[…] Sunai Phasuk, a Thailand-based researcher at Human Rights Watch, told Reuters the Uighurs could face serious abuses in China, including torture and disappearance. The World Uighur Congress says many in the group, which includes 20 women, could even face execution.

[…] “We have very serious concerns of torture, unfair trial, deaths in custody and even the death sentence, but once they’re sent back there’s really no way to track their progress,” [William Nee, Amnesty International’s Hong Kong-based China researcher] said. [Source]

An op-ed from Xinhua dismisses international concerns about the human rights of the repatriated Uyghurs, characterizing the extradition instead as a “routine law-enforcement cooperation mission”:

Thailand’s repatriation of over 100 illegal immigrants back to China is nothing but a legitimate and necessary law-enforcement cooperation mission in agreement between the two countries, and should not be interpreted as an ethnic or religious issue.

Some foreign governments have made unwarranted accusations on the matter, which can only be deemed as another unavailing episode of their long-time finger-pointing tactics to interfere in China’s internal affairs and disrupt China’s security and stability.

When getting to the bottom of such empty rhetoric, one will find that this issue is simply about a routine law-enforcement cooperation mission in agreement between Thailand and China.

To begin with, those repatriated Chinese citizens are not “refugees” of any political or religious oppression. They are illegal immigrants holding counterfeit passports in violation of laws of both China and Thailand. […] [Source]

More on Chinese government claims regarding illegal emigration and terror training from Michael Martina and Ben Blanchard at Reuters:

“Terrorist extremists from within China’s borders are recruited to illegally exit the country. Through Southeast Asian countries they go to Turkey and from there head to the so-called holy wars in Syria and Iraq, receive terrorist training and bide their time to return,” the ministry said in a statement sent to Reuters.

“This not only seriously damages China’s national security, but also is a threat to the security and stability of other relevant countries and regions,” it said.

[…] In March, Xinjiang’s Communist Party chief Zhang Chunxian said that authorities had busted “extremists” that had returned from overseas wars, but authorities have offered little evidence to support their claims.

Many foreign experts, as well as rights groups and exiles, have questioned whether ETIM exists as the coherent group China claims it is. [Source]

Another report from Reuters’ Ben Blanchard quotes Tong Bishan, a senior police official tasked with leading the extradition efforts, on how a lack of border security is hindering efforts to stem illegal Uyghur emigration. Tong’s additional comments on Uyghur’s freedom of domestic mobility point to an official intelligence deficit:

[…A]s security at transport hubs like train and bus stations in Xinjiang has been increased, Uighurs are Chinese citizens and have the right to travel anywhere in the country.

Tong said Uighurs, who speak a Turkic language, were using that right to get to border areas.

“You can’t just stop them because they are from Xinjiang or are Uighur. You can’t tell from their faces if they are terrorists.”

Tong’s remarks underscore the intelligence challenge China faces in Xinjiang, where government officials generally do not speak Uighur and where many Uighurs harbour an intense suspicion of the state. […] [Source]

Unlike domestic mobility, which is equally guaranteed to all Chinese citizens, international mobility is not. Human Rights Watch this week released a report criticizing the double-tiered passport system that restricts international travel for residents of areas with large populations of religious minorities. From HRW’s press release:

[…] The report documents cases where residents of areas with slow-track processing who were members of religious minorities faced delays of up to five years in getting a passport or were refused a passport outright, without being given any legally recognized reason […] [Source]

To control what Xinjiang Party Chief Zhang Chunxian recently described as “escalated infiltration and sabotage activities from foreign hostile forces disguised as religion,” efforts have been made to increase state control of minority religions in Xinjiang, Tibet, and predominately Christian regions of Zhejiang province.