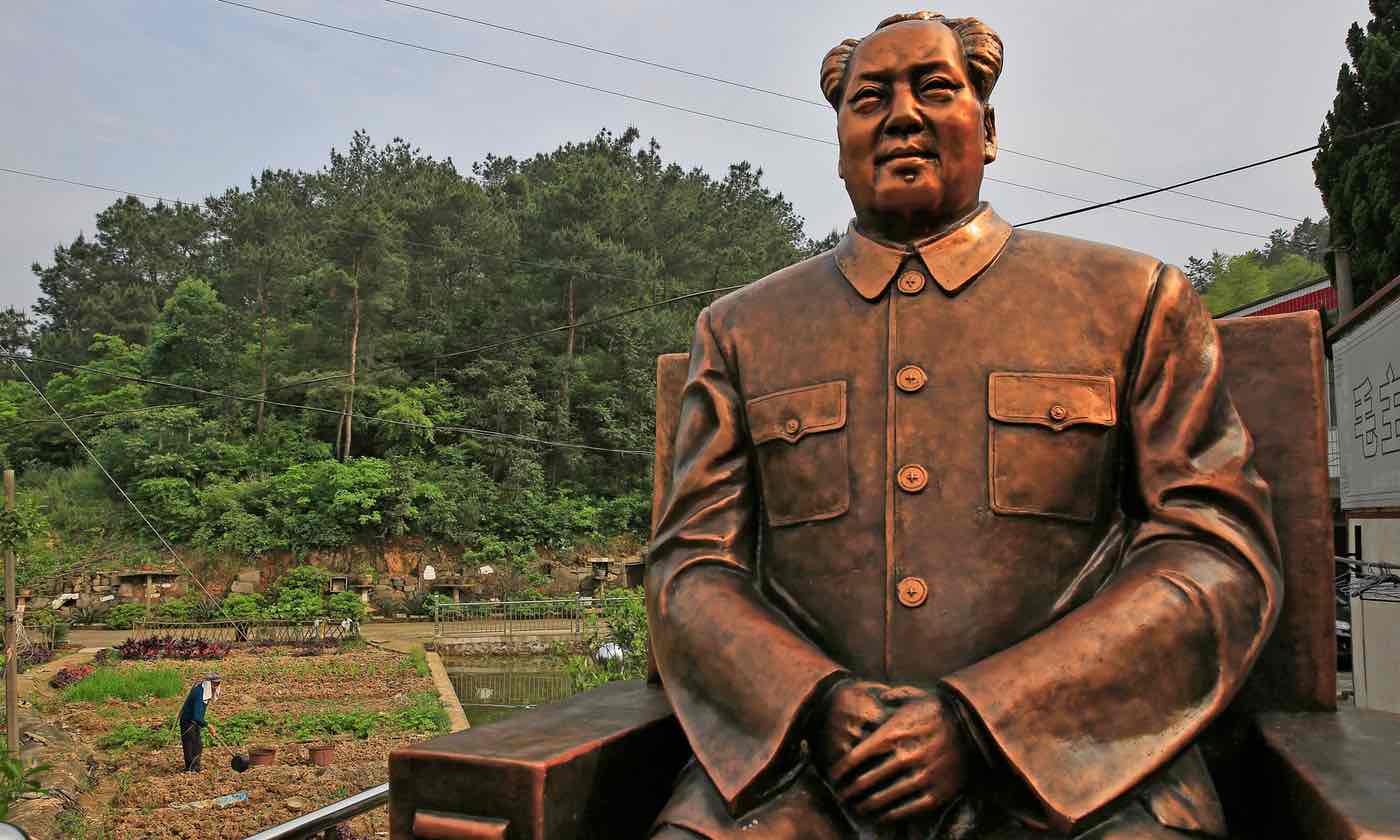 A “Christian theme park” in Hunan, the home province of Mao Zedong, is drawing intense criticism from some Chinese web users. The “theme park” recently opened in Changsha—Mao Zedong’s stomping grounds and a city known for being the place that the red revolutionary “converted” to communism. At The Guardian, Tom Phillips surveys some of the online debate that news coverage of the religious site has stirred up, quoting an expert on neo-Maoism on the inevitably of the controversy:

[… ] A second article, published on the neo-Maoist website Utopia, called the project an “imperialist cultural invasion”.

[…] Zhao Danyan, a third critic, called for the immediate demolition of the “unnecessary and inappropriate” structure. At best, it would harm local culture, he argued. At worst, it posed a threat to China’s “ideological security”.

Jude Blanchette, a Beijing-based academic who studies China’s resurgent community of neo-Maoists, said the commotion was largely the result of the church’s location in Chinese communism’s answer to Mecca.

[…] Blanchette said much of the fury was focused on a website called the Red Song Society, which he described as the Drudge Report of neo-Maoism.

“The narrative that they are passing around … is that this is just another sign of infiltration by hostile foreign forces and of how tepidly communist and red our officials are that you now get state money going to build a cross on the side of a building.” [Source]

Last April, President Xi Jinping himself warned of the ideological dangers posed by foreign religion. During his tenure as president, Xi has also overseen a campaign against Western values, as his administration’s judiciary and state media have regularly blamed “hostile foreign forces” for training human rights activists in an attempt to destabilize China.

At What’s on Weibo, Manya Koetse reports further on Chinese media coverage of the so-called Christian theme park and the online debate surrounding it:

[…] A Hunan TV report showed the park’s purpose as a tourist attraction and wedding photos location, but many netizens stress that China is a secular society and that the park’s construction in Changsha is not in line with the revolutionary history of the city.

In a popular WeChat article (link in Chinese) by an account called “Behind the Headlines”, the author also expresses his dismay at the fact that this Christian park, of all places, should be opened in the hometown of Mao, who was a convinced atheist.

[…] Despite all the criticism, not all netizens think the park is a bad idea. “This is freedom of religion. If you don’t like it, don’t go there,” one netizen said. One commenter complained that the widespread criticism was unfair, saying: “When there are mosques built, nobody dares to say anything, but when other religions make something, you open your mouths. It’s not right.”

There are also those who do not necessarily care about the religion, but do care about the money: “What on earth gave the Changsha government the right to use the taxpayers’ money for a Christian project? Should it not be a public park instead of a religious place?” [Source]

The Guardian’s Phillips also quoted an anonymous parishioner who says the cause of controversy is not a theme park, but simply a church and Bible study facility built on public land. Coverage from the Global Times cites a Hunan religious affairs official with a similar explanation:

The official surnamed Cao also denied the project includes a Christian theme park, adding the approved project only includes a Bible institute and “the work site” of the Christian Council of Hunan Province and Christian Three-self Patriotic Movement Committee of Hunan.

Cao refused to elaborate whether the “work site” is a church or an ordinary office building, adding that the project was built in accordance with China’s policy on religious property.

[…] The Changsha government website said the Xingsha Ecological Park, near which the church park is located, was a government-sponsored project. However, according to a statement jointly released by Hunan’s Christian council and committee on Friday, the project and the ecological park are not related.  [Source]

The debate over the high-profile religious site comes amid a years-running campaign against Christianity in historically Christian regions of Zhejiang province, where over 12,000 crosses have been removed since 2013 and several churches have been razed. Authorities have claimed that the campaign is not one against Christianity, but rather part of an urban “beautification” campaign. However, a leaked document from 2014 showed evidence of an official order to crack down on “overly popular” forms of worship.

As the Changsha “theme park” debate was unfolding on several online venues, a question on China’s Quora-like Zhihu platform about the possibility of simultaneously being both a Christian and a communist attracted an answer from the Communist Youth League:

In the Zhihu post, which first appeared on Jan. 28, an anonymous net user who said to work for the government explains their dilemma: “I graduated with a master’s degree in 2016 and have been a believer in Christ for half a year,” the post begins, “but now my work requires me to join the Party.”

[…] The CYL stepped up on Friday to provide enlightenment, using simple language and a pictorial peppering of Karl Marx, president and Party leader Xi Jinping with a Tibetan monk, and a black-and-white cartoon of the evolution of human beings. In its answer, the league listed a number of reasons or arguments as to why mixing faith with politics is not a good idea, and proposed some ideas about how Party members should handle the issue of religion within the broader society.

For example, the post read, the CCP and State Council, China’s cabinet, had clearly stated that Party members need to prevent their communist convictions from being eroded by religion. In addition, Marx’s teachings state that from their respective inceptions, communism and atheism have gone hand in hand. Furthermore, being an atheist Party member doesn’t mean giving up freedom of belief — rather, good cadres simply choose not to believe in religion, it argued.

Still, the post read, that doesn’t mean non-Party members should be discouraged from practicing religion. Marx said one day, religion will disappear, and that until then, it will remain a part of society. In conclusion, the Party and the religious masses can still collaborate, and “roll up our sleeves and work hard,” the post read, quoting President Xi’s recent new year address. […] [Source]

Meanwhile, Pope Francis’ ongoing outreach to China—controversial since its start due to China’s concurrent crackdown on foreign religion, including Christianity—appears to have taken another step towards an official agreement. Official relations between the Vatican and the PRC have been non-existant since Beijing cut ties with the Holy See in 1951. In 1957, China set up its own body to oversee domestic Catholicism, the Chinese Patriotic Catholic Association, relegating any Catholic in country who did pledge allegiance to the Pope a member of an “underground Church.” Last October, the Wall Street Journal reported (via CDT) that the Vatican and Beijing were close to a deal which would give Beijing say on the ordination of bishops and substantially cool long-fractured relations. Today, the Wall Street Journal’s Chun Han Wong provides an update: Cardinal John Tong, the head of the Roman Catholic Church in Hong Kong, has announced that the agreement is now even closer to finalization, “a key step in normalizing bilateral ties marred by six decades of estrangement”:

In a recent essay, Cardinal John Tong didn’t give details of the proposed deal, but expressed optimism that Rome wouldn’t compromise on religious principles in trying to resolve disputes over China’s insistence on having a state-controlled body appoint local bishops.

The Vatican spokesman, Greg Burke, on Friday said the talks with Beijing were “a work in progress,” declining to comment on any timeline.

The continuing dialogue “implies” a shift in Beijing’s policy on the Catholic Church toward recognizing the pope as “the highest and final authority in deciding on the candidates for bishops in China,” wrote Cardinal Tong, the Bishop of Hong Kong, in an essay published on his diocese’s website on Thursday. […] [Source]