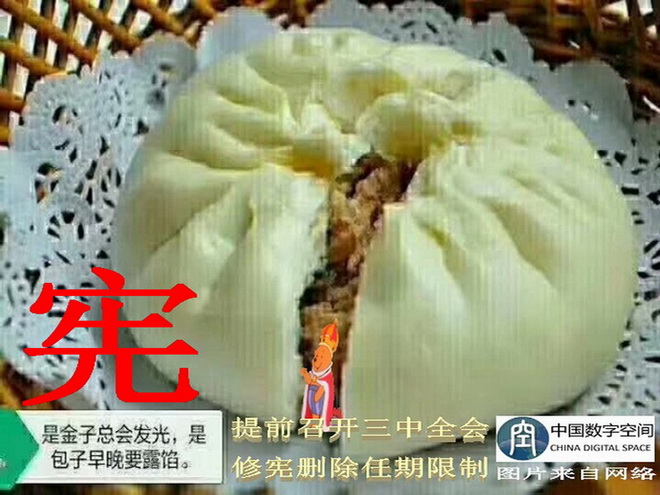 Netizen allusion to Xi Jinping’s apparent and expected attempt to extend his rule as state president past the constitutional two-term limit; a hybrid of a homophonous play on a Chinese saying indicating that someone’s secrets are being exposed (bāozi lòu xiàn’er 包子露馅儿, “the steamed bun is leaking its filling”) and a longstanding sensitive nickname for Xi Jinping.

On February 25, 2018, state media announced a list of proposed amendments to China’s constitution, which were expected to be adopted at the upcoming National People’s Congress session in Beijing. Among the proposed changes, an edit to the language in section three of article 79 would eradicate the two-term limits to the posts of PRC president and vice-president, and would potentially allow Xi Jinping to rule over the state for the rest of his life. Immediately following the news, social media flooded with expressions of what commentator Mo Zhixu described as “universal shock and lamentation.” Netizens subsequently saw a long list of terms banned from being posted and searched for on social media and critical opinions of the plan censored online. Meanwhile, legal professionals in parts of the country were reportedly threatened with disbarment should they post “harmful information or comments” about the amendment. An attempt to post the phrase yielded “Sorry, this content contains information that violates the law or the ‘Weibo Community Convention,’ and we are unable to advance operation.” (Source: Weibo)

Many of the terms banned on social media dealt with the topic as an apparent attempt by Xi Jinping to install himself as a virtual emperor. The phrase “Steamed Bun betrays the Constitution,” which as of March 2, 2018 was blocked from being posted on Weibo, fused a longstanding sensitive nickname of Xi’s with the Chinese saying bāozi lòu xiàn’er (包子露馅儿), “the steamed bun is leaking its filling.” In 2014, after the International Consortium of Investigative Journalists’ revelation that several family members of top Chinese leaders were using offshore tax havens—among them, the brother-in-law of Xi Jinping—netizens turned to the saying to mock the revealed ties. Xi had earlier earned the mocking nickname “Steamed Bun Xi” following a staged lunch at a popular dumpling restaurant in Beijing, and the moniker along with several related netizen terms was blocked from search results on Weibo.