Chinese protesters shot down insinuations that their demonstrations this past week were controlled by shadowy “foreign forces,” a tactic often used by the state and its defenders to strip dissent of its legitimacy. Dozens of protests against zero-COVID took place over the weekend and into the early parts of this week in several major cities after a fire in a locked-down Urumqi apartment killed at least 10 people, a number local residents contend is drastically underreported. Some of the protests veered into explicitly anti-regime demonstrations, with calls for an end to the Chinese Communist Party and Xi Jinping’s rule. Authorities have combined traditional repressive measures—arresting those who attended with the aid of high-tech surveillance—with a campaign of distraction and counterprogramming intended to divert attention from them and their causes. Two leaked directives from the Cyberspace Administration of China show that the state has also moved to cut off citizens’ already limited access to the foreign internet and increase its control over the heavily censored domestic internet. Officials have also sought to cast the incidents as a product of “hostile forces” from abroad, reports Jacob Gu of Bloomberg News:

Security czar Chen Wenqing used a meeting of the Communist Party’s Central Political and Legal Affairs Commission to urge law-enforcement agencies to take strong measures to safeguard national security and social stability, according to a statement. “Illegal and criminal acts that disrupt social order” won’t be tolerated, the commission said at the meeting, which was held on Monday and not disclosed until late Tuesday.

[…] The commission’s warning marks the first time the Chinese government has blamed “hostile forces” for the protests — the most significant display of unrest of President Xi Jinping’s decade in power. The Communist Party has often attributed internal unrest to foreign meddling over the years, without saying who it is referring to or providing evidence.

[…] “This narrative seeks to reinforce the idea that the people they rule over have a natural loyalty to the regime and support its policies by default,” said Ja Ian Chong, an associate professor of political science at the National University of Singapore. [Source]

The charge is an old one that has been used to tar Chinese protestors for decades. In late 1989, then-General Secretary of the CCP Jiang Zemin, who died this week, insinuated that the democracy movement of that spring and summer was the product of “hostile international forces.” Since then, the charge has been used to discredit any expression deemed hostile to the Party-state. To name but two more recent examples, a lesbian marriage proposal in 2016 and protests over the cover-up of a Chengdu teenager’s suicide in 2021 were both tagged as products of “foreign forces.” Even state institutions are not exempt from the charge; an inspector at the powerful Central Commission for Discipline Inspection accused a top state-run think tank of being under the influence of “foreign forces” in 2014. The charge has become something of a meme online, with a popular joke remarking how “busy” foreign forces must be to insert themselves into such a range of activities across China.

Over the weekend, an observer at a Beijing protest lobbed the charge at those gathering in protest. In an extraordinary exchange that was caught on camera and shared widely on Twitter, a man asserted that “foreign anti-Chinese forces [are] in our midst.” At The New York Times, Agnes Chang and Chang Che reported on the crowd’s quips about and rebuttals of the attempted smear:

“We are all patriots,” one replies.

“By foreign forces, are you referring to Marx and Engels?” another asks, referring to the Communist Party’s own roots in the ideas of the two German philosophers.

“Was the Guizhou bus flipped over by foreign forces too?” (In September, a bus headed to quarantine in the province of Guizhou crashed and killed 27 people, fueling nationwide anger over China’s zero-Covid policy.)

“Were we all called here by foreign forces?” one man asks the crowd. “No!” they reply. [Source]

Another person in the crowd joked: “Can’t go abroad, can’t go on overseas [news] networks, how do we communicate with foreign forces!”

This was such a brilliant video I subtitled it so more people can watch it. Beijing students' response last night to accusations that there are 'foreign forces' at play in this weekend's protests

'The foreign forces you are talking about – are they Marx and Engels?' https://t.co/umdFaVhz2s pic.twitter.com/RoohkFaZgE

At The Washington Post, Christian Shepherd and Vic Chiang reported on how nationalistic commentators echoed the claim that “foreign forces” were behind the protests:

In that worldview, the United States and other Western powers are often demonized as trying to undermine China’s rise. Nationalist commentators have responded to the recent demonstrations with well-worn arguments that claim the dissenters are organized by clandestine foreign agents.

“This is the [party’s] usual tactic to divide people” and shift blame, said Yan, a former teacher in Chengdu who only gave his last name out of security concerns. He attended a vigil on Sunday to remember the 10 victims of an apartment building fire in the city of Urumqi, which local residents believe was made worse by firefighters’ slow response because of pandemic restrictions. More than 1,000 people took part in the vigil, calling for freedom over coronavirus testing and chanting “give me liberty or give me death.”

[…] Ming Jinwei, a former editor at state-run Xinhua News Agency turned political blogger, wrote on WeChat that while not everyone with complaints was a foreign agent, the threat of “hostile foreign forces” remains very real and present. Alongside American intelligence agencies and human rights groups, he listed Chinese people who are “spiritually American” or Western media as examples. [Source]

A number of other state-affiliated and state-sympathetic voices echoed the idea that “foreign forces” were behind the protests. The Harvard-educated blogger Ren Yi, grandson of the late Party luminary Ren Zhongyi, asserted, without apparent irony, that the protests were fueled by foreign forces: “What is their purpose? On one hand it is to intensify internal conflicts. On the other hand, it is to see if they can completely politicize the issues around our epidemic prevention and health policies.” The wife of notoriously combative foreign ministry spokesperson Zhao Lijian wrote on Weibo that “I’m extremely worried that young people will be used by forces with ulterior motives who want to fan the flames and incite conflict and hatred.” She initially seemed to invite criticism by writing, “Go ahead and curse me. Let it all out!” but then locked the post’s comment section and turned off the repost function after netizens began to point out her hypocrisy, given that she herself had vacationed, maskless, in Germany this summer.

On Weibo, accusations of foreign influence or control levied by the state and its supporters were widely mocked:

isekisi里的旋转小字：I’ve come to understand their underlying logic, which is that “Chinese people do not deserve nice things.” If you ask them why other countries can gradually re-open but we cannot, they say that China’s population is too big to adopt those foreign tactics. Ha, sure. If you ask them why foreign youth can enjoy uncensored music, art, and film to their heart’s content but Chinese youth cannot, they say that Chinese youth are too easily influenced. Ha, sure. If you ask them why there are robust labor laws abroad but in China “996” is a blessing, they say China is still a developing country and must take measured steps. Ha, sure. No matter what you ask them, they’ll never give you a straight answer. Instead they’ll parrot lines about how Chinese people don’t deserve A, or can’t do B, or aren’t quite ready for C. And then, despite the fact that they can’t seem to find any good in the Chinese people, they’ll tell you all about how patriotic they are.

9527kw：Wait, which one is it again: do “foreign forces” want us to keep doing zero-COVID or do they want us to open up? Can we get a definitive answer? I’m hopelessly confused

MianMaoKu：”Foreign forces” are so weak, every time they organize a mass protest it comes to nothing. They’ve got no organization, no planning, no proper procedures, and never get any results.

六十二亿恒河沙：Almost overnight, we’re swamped with “foreign forces.” What I want to know is, how did all these foreign forces get plane tickets? Did they complete their quarantine period? Do they all have green health codes?

罗套套：When I first started promoting the HPV vaccine inside China, all these people came out of the woodwork to oppose it, on the grounds that “Chinese women’s reproductive systems are weaker than those of foreign women, so we can’t use that foreign stuff.” I was freakin’ shocked. It’s like, oh, Chinese people don’t deserve this, they can’t even have that. Even their twats are weaker. Now that a couple years have passed, these people are a damn joke. You don’t have a weak twat, but you are a stupid one.

熊爸喵喵：Here’s something worth pondering: if someone lives abroad and thinks differently from you, are they by definition “foreign forces,” and malicious ones at that? Is it logical or sensible to harbor suspicion and malice toward all foreign countries? Shouldn’t we believe that there’s something to humankind beyond malice—a shared conscience that transcends borders, a basic sense of justice, a similar definition of what constitutes a good life?

DDmao999：Things are getting serious. Even Japanese foreign forces are in attendance. 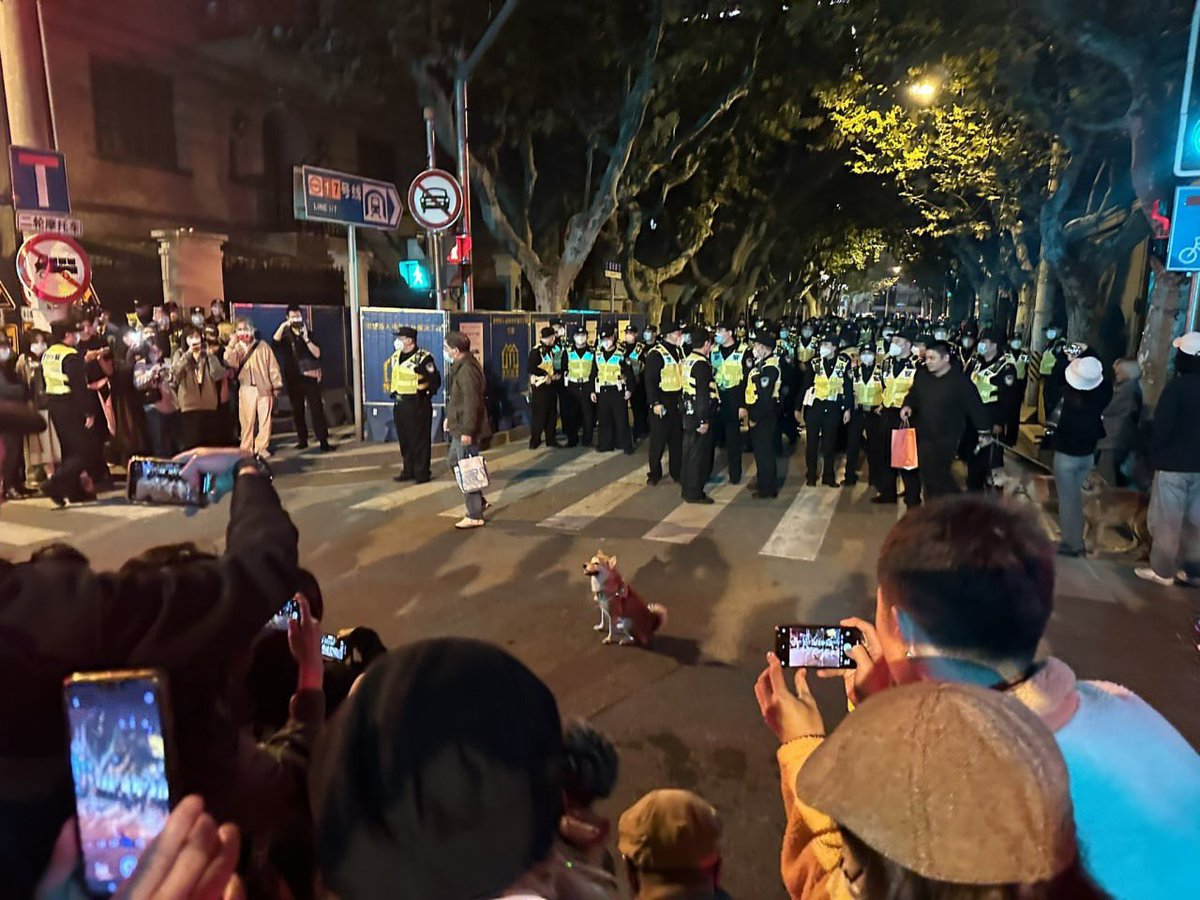