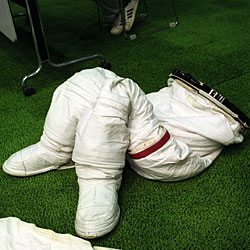 Monday, Oct. 10, 2005
The second-ever manned Chinese space flight is slated to carry two astronauts on a five-day journey circling Earth, while they conduct experiments on pig sperm. But the flight’s importance reaches far beyond any advances in animal husbandry that may result from exposing hog semen to weightlessness. It is the latest shot fired in a fiercely competitive space showdown between China and Japan.

The contest may not be accompanied by the blaring cold-war overtones of the last great space race between the U.S. and the Soviet Union. China’s space program is conducted largely in secret, and Japan’s modest achievements don’t make headlines. But plenty is at stake. Over the past few years, a centuries-old rivalry between China and Japan has flared anew. While the two countries are increasingly interdependent economically, relations remain uncomfortably strained as fast-growing China begins to challenge Japan as the preeminent East Asian power. This spring, for example, anti-Japan riots erupted in a number of Chinese cities, and diplomatic disputes over natural-gas-field rights in the East China Sea continue to rage.