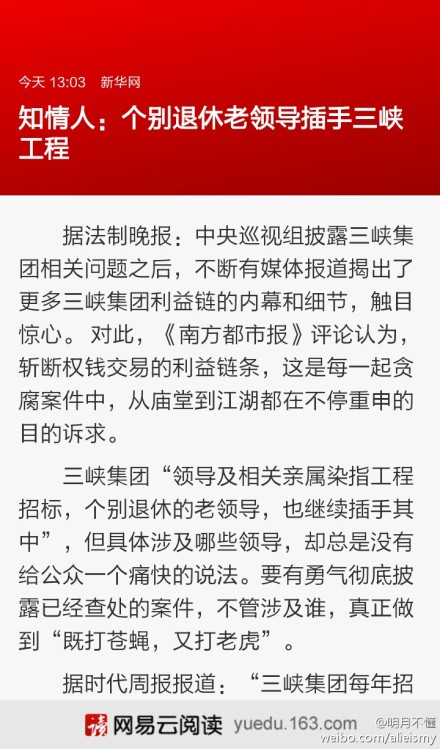 The Central Commission for Discipline Inspection released a report last week alleging graft among officials at the state-owned China Three Gorges Corporation—the power company established in 1993 to oversee construction of the controversial Three Gorges Dam project. A state media report rounding up coverage of the CCDI probe’s findings [zh] noted secretive construction bids, bribery, and interference by “a certain retired old leader” (个别退休老领导) and his family members. The ambiguous language had many netizens wondering which unnamed leader might be the next casualty of the Xi Administration’s ongoing crackdown on corruption:

王兴律师v: Who is this certain retired leader that the inspection team has fingered for meddling in the Three Gorges Corporation’s affairs???

特许连锁李维华: “Old leader,” how profound. Who is it?

Some netizens did their own reckoning:

宝四奔五: Old Li, was it you who was meddling? You sure have your feet in deep. You already irrigated the Three Gorges Dam project. //@宝四奔五: Was it Old Li? //@北京酋长: That’s quite a proposal!//@旷世羊倌: +1, I hope the aforementioned “Old Leader” is made public, and also the innocence of other old leaders (that is, if there still are any innocent old leaders).

Li Peng retired from political life in 2003 after a highly decorated Party career. Between 1988 and 1998, Li was the premier of the PRC, and the second most powerful member of the Communist Party. He earned the nickname “Butcher of Beijing” after declaring martial law in Beijing in June 1989, which led to the military’s violent suppression of the protest movement. During his tenure as premier, the heavily debated Three Gorges Dam was his pet project. If the above netizen speculation turns out to be true, Li could one day eclipse embattled and similarly retired old leader Zhou Yongkang as the biggest “tiger” to be netted in Xi’s anti-corruption campaign.

徐静波微博 posted a picture showing Li Peng’s daughter Li Xiaolin, who was implicated last October in a multi-million dollar bribery case, which allegedly occurred while her father was in office.

徐静波微博：Committee Member Li has been awfully quiet this year

Li Xiaolin’s luxurious wardrobe and public statements have made her the brunt of weibo criticism many times in the past. Netizen 马年大吉的宏 sarcastically came to Li Xiaolin’s defense:

马年大吉的宏：She is a strong person with no capital besides her own ability, who excels in virtue and learning. With her moral character, she looks down on the impure and acts as a model for them to establish their own ethics. Her own struggle has allowed countless children of retired leaders to join together in continuing the construction of the great motherland! Eldest sister, how will you die?