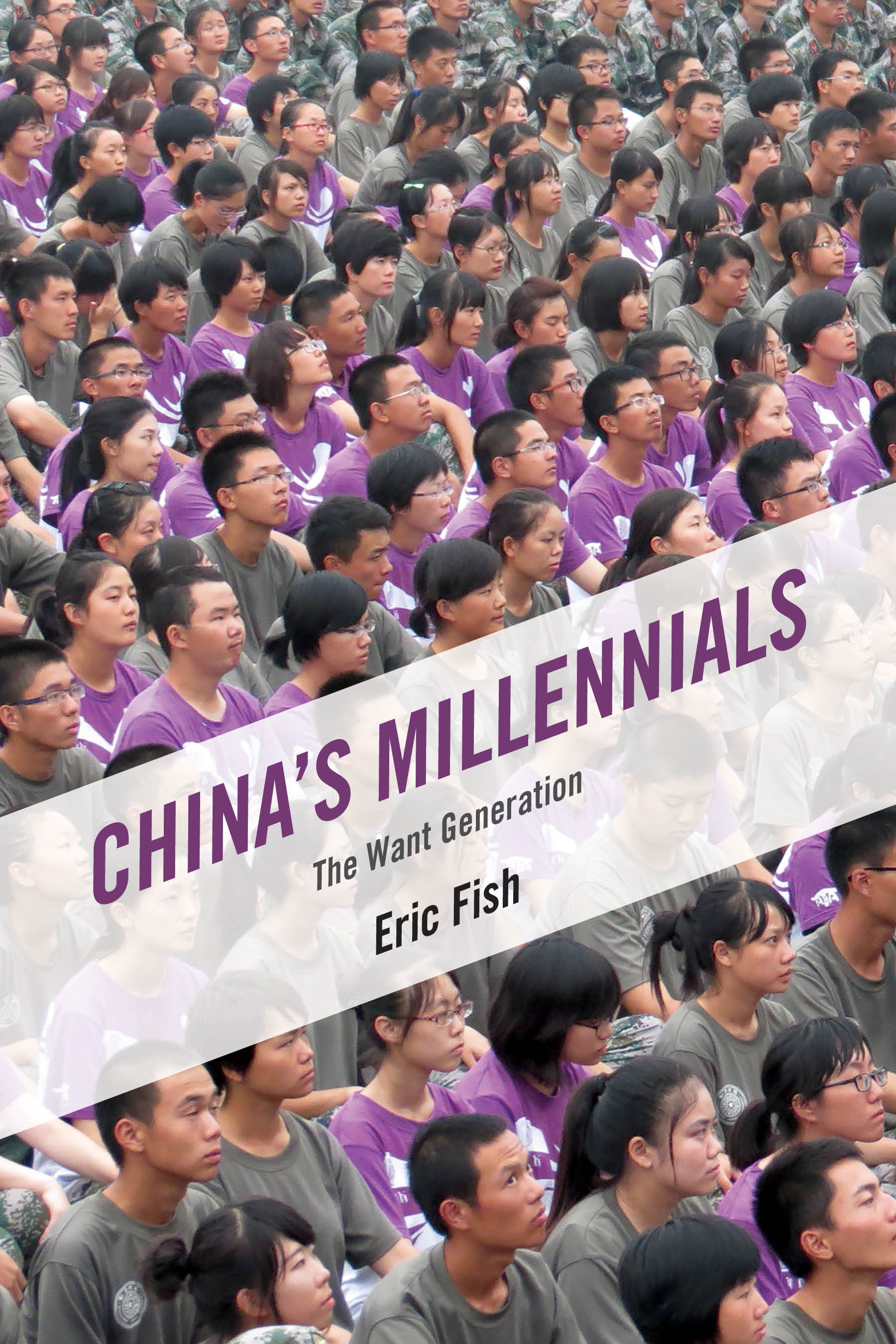 Eric Fish arrived in China in 2007 to teach and went on to write for the Beijing-based Economic Observer. He is now a writer at the Asia Society in New York. His first book, “China’s Millennials: The Want Generation,” comes out today. I talked to him about college entrance exams, corruption on campus, women’s rights, and other big issues China’s 20- and 30-somethings are grappling with. 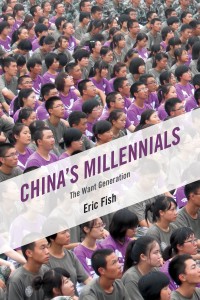 China Digital Times: You talk about the rise of Weibo as a tool of citizen journalism after the Wenzhou train crash in July 2011. Weibo has certainly enabled the public to hold the government accountable for cover-ups and corruption, especially at the local level. But since the crackdown on “Big Vs” and chilling of Weibo discourse, can Chinese citizens still effectively use Weibo—or other social media platforms—to keep the government in check and call for justice?

Eric Fish: Weibo and other social media have certainly been subdued since their heyday from around 2010 to 2013 through a combination of government crackdown measures and the rise of WeChat (which is less conducive to making stories go viral). But it’s definitely still possible to keep authorities in check. News of the five detained feminists in March, for instance, was still able spread domestically to at least thousands of people, who then put pressure on authorities.

But I think something worth considering is that, in spite of the social media crackdown, the cat is already out of the bag. The Weibo heyday slapped people across the face with things that many had never realized were so serious—like forced abortion, media censorship, land grabs, tainted food… you name it. I think that changed the way a lot of Chinese look at the country around them. Now you have young people coming of age who, during the formative years of their life, were exposed to these alternative narratives challenging the Party line. It’s not as if culling social media now can stuff that cat back in the bag.

CDT: You devote a chapter of your book to the complex, corrupt student-faculty relationships at Chinese universities. How has Xi Jinping’s anti-corruption campaign affected some of the issues in higher education which you touch on, such as plagiarism and exploitation of students’ research by professors?

EF: Xi’s anti-corruption campaign has certainly targeted higher education and taken down some corrupt university bigwigs. And, anecdotally, it does seem that people are feeling the effects in ways like being expected to bribe less frequently. These appear to be positive developments, but I’m very skeptical of how deeply a top-down anti-corruption drive can really impact Chinese higher education. Chinese universities are very much part of the Party bureaucracy. As one education scholar explained to me, university Party officials (who are the most powerful people in schools) are often “parachuted” in, less for their educational credentials and more for reasons related to relationships, factional politicking, ideology, and even corruption. Then these leaders often treat their job simply as a stepping stone to a higher position, which gives them incentive to please their superiors through a checklist of measurable benchmarks such as volume of academic papers published, and cover up anything negative that might hurt their standing. This mindset then trickles down to school faculty at all levels.

The “external” university inspections meant to uncover problems are a joke, there’s little transparency (student newspapers, for example, tend to be heavily censored by school officials), and students are at the bottom of a relatively strict command and control structure designed to keep them from rocking the boat. Some Chinese universities are less affected by this than others, but this structure in general is very conducive to academic dishonesty, corruption, and exploitation of students.

To be sure, there are substantive education reforms happening, and many schools are getting serious about tackling academic dishonesty. At the same time, students’ shrinking inhibitions about speaking up, coupled with improving communication tools to expose misdeeds, are helping keep administrators in check. But the culture of corruption in colleges is so deeply entrenched, and the Communist Party’s fear of students becoming an opposition force ensures it will probably never release universities from its tight control—on the contrary, it seems to be asserting greater control. There are so many problems in Chinese universities and so many things contributing to them. A piecemeal anti-corruption campaign might be scratching the surface on some of these problems, but it’s probably going to take a whole lot more than that to address these deeply systemic issues.

CDT: Could you compare the anti-CNN affair to the Model UN kerfuffle earlier this year?

EF: There was the same insistence in both cases by young Chinese for respect of China’s territorial claims—Tibet in the former and Taiwan in the latter. In both cases, one could argue that students perhaps went a bit overboard in their reactions. And in the case of anti-CNN, there’s certainly plenty to be said about the dubious ways in which it went about making its points. But there was substance to its main grievance—that there was some misreporting in international media on the 2008 Lhasa violence.

I think in both these cases, there was some handwringing in the West that even Chinese youth who had studied in liberal democracies were still “brainwashed” or trying to ingratiate themselves with the Chinese government. When I spoke with Rao Jin, the founder of anti-CNN, he said one of the first questions foreign reporters always asked him was whether he was being funded by the Communist Party. He found this idea quite laughable, since he himself was quite critical of the Chinese government and had in fact been “invited for tea” by authorities on a few occasions.

Some people seem to have a hard time accepting that critically thinking young Chinese can hold very different viewpoints from what’s commonly held in the West. And at the same time, some people have trouble reconciling the fact that intensely patriotic Chinese who fervently defend China’s position on international issues can also be just as critical of their own leaders. Let’s not forget that many of the student movements in Chinese history railing against domestic leaders actually started as nationalistic protests toward foreign countries.

CDT: The resurgence of victimhood and nationalism—the narrative of the “century of humiliation”—in the post-Mao era seems to be part of a greater awakening of latent ideas and institutions from China’s Republican and late imperial eras. You compare the gaokao to the imperial examination system, for example. Did these pre-communist structures survive the Mao era, or were they truly killed off, only to be resurrected later?

EF: The Mao era only lasted 27 years, far too little time to really “kill off” long-standing mindsets. Though the “national humiliation” narrative wouldn’t be officially revived until 1991 with the “Patriotic Education Campaign,” there were still large scale anti-Japan protests starting in 1985 that incorporated that mindset. In the case of high-stakes exams, they were used off and on for centuries, so the Mao era interruption was just one of many.

CDT: While social media has created space for social activism in China, the detention of five women’s rights activists right before International Women’s Day this year sent a particularly chilling message. Activism around issues which are not overtly political, such as sexual harassment, have now been politicized. Do you still think young people will feel empowered to push for social change, given that the territory for activism seems to be closing faster than it opened?

EF: The increasingly tense atmosphere for activism is surely scaring some people into silence in the short-term, but it’s also bringing more and more Chinese into contact with the coercive measures employed by authorities, and in turn, creating more sympathy for those who get cut down (and less sympathy for those doing the cutting).

A few interesting things are happening, and the detention of the “feminist five” is a useful case study. They were part of a relatively small band of women focusing on very practical hardly-politicized issues. But their arrest prompted outcry from thousands within China. In one ham-fisted move, authorities created scores of new activists and gave people who were otherwise apolitical a reason to take an active interest in politics (and not in a way the CCP would want). These supporters also included men, who weren’t directly affected by the feminist causes. And when the five feminists themselves were released after lengthy and harsh detentions, were they scared straight? Nope, they almost immediately resumed speaking out.

What we’ve seen in the past several years is young Chinese becoming less afraid of raising their voices, and more sympathetic and willing to speak up on issues that don’t directly affect their own lives. Take the 2013 Southern Weekly protests, or the recent open letter by overseas Chinese students about the 1989 Tiananmen crackdown. This still represents a relatively small segment of the young population, but we were scarcely seeing anything like this from Chinese youth five to ten years ago. It’s becoming less surprising to see actions like this now. The government is doing well for the moment at tamping down the big public demonstrations and online movements that were building up under Hu Jintao, but in doing so it’s alienating and angering more people, which in turn creates the need for even further-reaching clampdowns. I have no idea where this is leading, but it seems like a difficult strategy to sustain.

CDT: Chinese millennials face many of the same challenges of young people the world over. The struggle for college admissions, employment, financial security, and marriage resonate with the experience of young people in the U.S., especially since the recession of 2008. What is unique about the challenges facing China’s youth, and about the way they tackle those challenges?

EF: The issues you mentioned are indeed felt by millennials around the world, but because of China’s population and competition for resources, it’s almost as if there’s a magnifying glass over them.

Many of the big, uniquely Chinese challenges are the result of two policies: the hukou residency system and the “one-child policy.”

The hukou system has made it hard for rural youth to keep up with their urban counterparts in things like college admissions, employment, and housing.

The one-child policy has had an even more intense effect. It has created an artificially tight population bottleneck and is forcing a generation of only children to shoulder the burden of taking care of China’s older baby boomers. It’s also exacerbated a cultural preference for boys and led to the world’s largest gender imbalance. China is poised to have tens of millions of surplus men, which is creating serious problems with the marriage market, real estate, crime, and treatment of women. Chinese youth are tackling these challenges, by-and-large, the only way they can: by biting their lip and trudging through them one step at a time.