Yang Jisheng Lashes Out at Censors 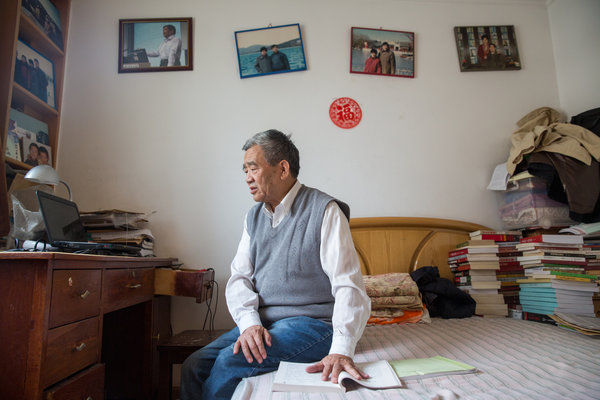 In April, liberal Beijing magazine Yanhuang Chunqiu’s chief editor Yang Jisheng was reportedly visited by retired officials from Xinhua and the Central Commission for Disciplinary Inspection. After negotiating with Yang, a former Xinhua journalist and author of “Tombstone,” a candid book on the highly sensitive Great Leap Forward based on records from his years with the state news agency, it was agreed that he would resign from his post as editor. On June 30, his last day with the outspoken magazine, Yang wrote a letter to the State Administration of Press, Publication, Radio, Film, and Television—China’s top censor—sharply criticizing their tight controls for “forcing [the magazine] into a corner.” The South China Morning Post’s Verna Yu reports:

Yang confirmed on Thursday that he had written the letter, but said he had not made it public. He declined to comment further.

[…] Yang’s letter said administration’s demands that articles related to 15 topics must be submitted and approved before publication made it impossible for Yanhuang Chunqiu and similar journals to function.

[…] Yang argued that the magazine had already censored itself for a decade, pledging to the authorities it would not to touch upon eight “sensitive” areas: multiparty democracy, separation of powers, stories on party leaders and their families, Tibet and Xinjiang pro-independence rhetoric, the 1989 Tiananmen crackdown and religious issues.

“Please leave the popular Yanhuang Chunqiu a little bit of space to survive,” he said at the end of his letter.

In another letter to the magazine’s editorial board and readers, Yang wrote: “Times are changing. Maybe one day, under our opponents’ pressure, Yanhuang Chunqiu may have no choice but to perish.

Yet publisher Du Daozheng, 91, who has taken on Yang’s role since his departure, vowed the magazine would keep going. [Source]

The liberal Beijing magazine is known for publishing outspoken articles challenging the official historical narrative. The editorial independence enjoyed by the magazine—a rare trait in China’s tightly controlled media landscape—stems from the support of reform-minded retired officials (including from Xi Zhongxun, father of President Xi Jinping). In recent years, the magazine has faced increasing pressure from authorities, including a government-ordered switch in organizational affiliation to a body that would give censors more direct control over content. Last year, in a move to preserve its editorial autonomy and overall longevity, it hired Hu Deping, son of former Party general secretary Hu Yaobang, as publisher, and another princeling as his deputy. However, neither were able to take up the posts due to formalities surrounding their former official positions, leaving 91-year-old Du Daozheng no choice but to continue running the magazine.

During Xi Jinping’s presidential tenure, China’s methods of traditional and new media control have seen steady reinforcement alongside wide-reaching campaigns to encourage ideological orthodoxy—and proposed laws seeking to legislate it. In another sign of an increasing government precedent on censorship, propaganda, and ideological work, a provincial propaganda official with a track record of cracking down on liberal media has now been promoted to a high national post. Months after becoming the propaganda chief of Guangdong in 2012, Tuo Zhen oversaw the swapping of liberal newspaper Southern Weekly’s customary new year editorial on constitutionalism for a pro-Party essay which in turn led the paper’s editorial staff went on strike, and incited a rare public protest for press freedom in the southern province. The once influential paper has since been driven to the margins of Chinese media, and Tuo Zhen has now been promoted to deputy chief of the Central Propaganda Department (also known as the Central Publicity Department). From the South China Morning Post’s Li Jing:

The Communist Party’s man in charge of propaganda in Guangdong when two of the biggest media crises in recent years rattled the province has been promoted to deputy head of the Central Publicity Department.

Tuo Zhen, 55, made his first public appearance in his new role at a workshop on children’s literature in Beijing last week, according to the China Writers Association, which hosted the event. The promotion takes him a step higher in official status to ministerial level, a reward for tightening the reins on the province’s liberal media, according to one observer.

[…] Commenting on the promotion, a former journalist from the Nanfang Media Group, which owns the Weekly, said: “We fear the tight grip on Guangdong media will be extended nationwide from now on.”

“As soon as he landed in Guangdong, we felt the pressure immediately.” [Source]

A report from Radio Free Asia outlines a shift in Tuo’s career from respected journalist to ideological propagandist, and echoes concerns that his promotion to a national level official propaganda post could foreshadow increasingly tight state media controls:

Guangzhou-based independent writer Ye Du said Tuo was once a respected journalist, but had since taken to supporting an ongoing nationwide clampdown on freedom of expression under the administration of President Xi Jinping.

“His entire ideology seems to have changed,” Ye said. “You could say that the Southern Weekend incident was the starting point of this change.”

[…] According to veteran Hebei-based reporter Zhu Xinxin, Tuo’s new job will send a clear message to China’s already tightly controlled media that the government will continue to keep up the pressure on the industry.

“The space for expression just got smaller, because if somebody like Tuo Zhen has been appointed to such an important post … then there is less and less hope for this country,” Zhu said. [Source]