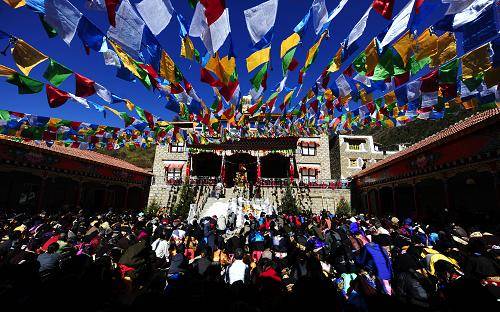 At China Policy Institute Blog, Elliot Sperling of Indiana University looks at how the Chinese government routinely dismisses the grievances of the country’s ethnic minorities by assigning blame to so-called “foreign anti-China forces” and other scapegoats.

In this environment dissent and grievances from Uyghurs and Tibetans are not seen simply as expressions of discontents that might be redressed. They are, rather, threats to the stability of the regime and the nation. And these grievances are very substantive: demographic marginalisation; internal travel restrictions (for Tibetans); blatant discrimination in employment and other areas; harsh restrictions and monitoring of religious and social practices; and even (particularly with Uyghurs) restrictions on clothing and grooming. This is not to mention the particularly severe nature of political imprisonment visited on Uyghur and Tibetan dissidents. Given all this, it would be surprising if there weren’t widespread resentment of the Chinese state. But the official response is not to ask what policies and conditions are behind the discontents being expressed. It is to ask who is doing this to China; who is behind it all. It is to demand scapegoats. This ought to seem reasonably clear when recourse is made within China proper to the plotting of foreign anti-China forces. Uyghur and Tibetan protests and dissent are respectively and reflexively ascribed to Islamic terrorism and the machinations of the Dalai Lama and his clique. The former claim, regarding the Uyghurs, may yet become a self-fulfilling prophecy. For over two years one of the most prominent Uyghur intellectuals, Ilham Tohti, has been in prison (now under a life sentence) for voicing Uyghur grievances and publicising violations of their basic human rights. Almost uniquely moderate (he does not advocate independence), his persecution and imprisonment exemplifies how China feeds and bolsters extremism: by sweeping up moderates who work and speak openly, it leaves only extremists, who by necessity are below the radar, to speak to the grievances that afflict large numbers of Uyghurs.

Inside Tibet the use of the Dalai Lama as a scapegoat has a history of decades and has had no success (except, perhaps, in increasing veneration of and allegiance to him on the part of the Tibetan population). The greater visibility of the Tibet issue has generated a greater degree of attention to Tibet as an international issue impacting China’s image than has been the case with the Uyghurs and a greater amount of ink in official publications and pronouncements has been given over to vehemently asserting the correctness of China’s policies and actions in Tibet. But in spite of the repeated rhetoric about the Dalai Lama plotting to split China, his stand against Tibet’s independence is known to a number of those who deal with the Tibet issue inside Chinese officialdom. Similarly, Ilham Tohti’s rejection of independence for the Uyghurs is also not unknown. [Source]

The tightening of space available for Tibetans and Uyghurs to voice their dissent has been underway for many years. At least 142 Tibetans have self-immolated in protest against Beijing’s policies in the autonomous region since 2009. According to Tibetan writer and activist Tsering Woeser, the self-immolations are a response to tighter restrictions following a 2008 crackdown on protests in Tibet. Chinese authorities have since expanded a surveillance program in the region and intensified pro-Beijing propaganda to drown out dissident voices. In Xinjiang, cultural and religious restrictions have been enacted to regulate ethnic Uyghurs. Last year, Party chief Zhang Chunxian announced plans to promote Mandarin study as well as racial “blending” in the region. Currently, Xinjiang is at the center of a countrywide “war on terror” that President Xi Jinping launched in 2014. The move is a response to a series of  violent incidents across China that authorities have attributed to Uyghur separatists and religious extremists. On the Internet, Tibetans and Uyghur activists critical of Beijing have also been targeted by hackers believed to be linked to Beijing.