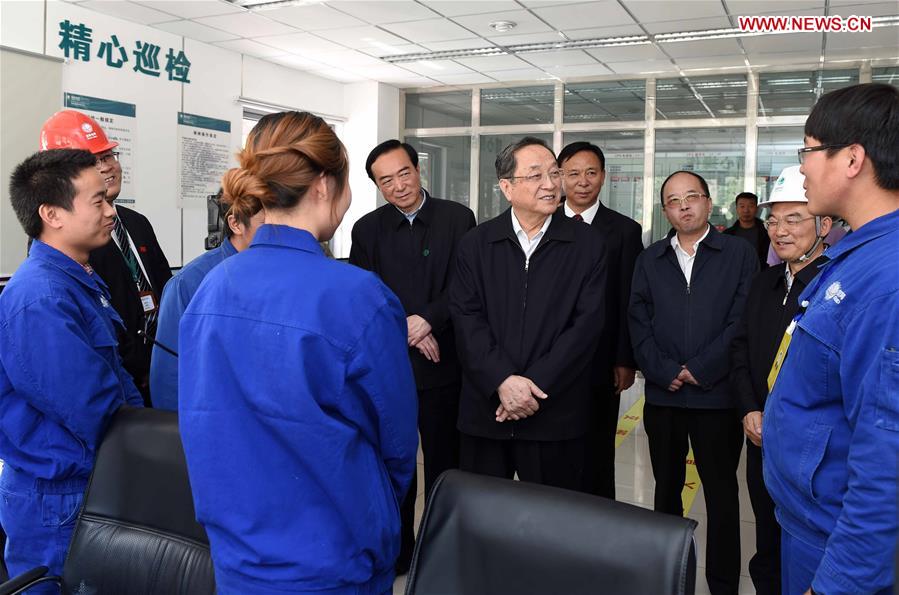 While visiting the Tibetan Autonomous Region, Chinese People’s Political Consultative Conference National Committee chairman and Politburo Standing Committee Member Yu Zhengsheng called on Tibetan religious leaders to “resist the influence of foreign forces.” Yu’s call comes months after President Xi Jinping himself warned of foreign infiltration through religion. “Foreign forces” with “ulterior motives” are often blamed for domestic unrest by officials, and were scapegoated by state media for attempting to foment a “color revolution” in China by training lawyers and activists detained in a widespread crackdown on rights advocacy last year. During trials this month, several of those detained last year offered confessions about foreign training which are widely believed to have been coerced. Global Times reports:

At Galden Jampaling Monastery, Yu urged them to carry forward their patriotic traditions and guide their followers in the region to safeguard national and ethnic unity.

He called on local authorities to defend the religious freedom of all ethnic groups, adding that authorities should protect monasteries and ensure believers’ normal religious life.

[…] Wang Zuoan, head of the State Administration for Religious Affairs, wrote in the Study Times that some Western countries distort China’s religious situation in the name of “religious human rights,” and foreign hostile forces use religion to infiltrate China.

Wang urged that religion be “sinicized” to avoid foreign forces’ attempts to alter China’s ideology and political system through the use of religion. [Source]

Wang’s call for the “sinicization” of religion echoes one last year from Zhang Chunxian, the Party chief of Xinjiang, where unrest and violence has been blamed on influence from the global jihad movement.  The AFP has more on Yu Zhengsheng’s comments in Chamdo with context on the situation in Tibetan regions of China:

“We should guide and support representative Tibetan Buddhist figures to use the leading principles of the core socialist values to explain doctrine, and promote the adaption of Buddhism to socialist society,” Yu added in comments at the Galden Jampaling Monastery on Saturday.

Beijing says its troops “peacefully liberated” Tibet in 1951 and insists it has since brought development to a previously backward region where serfs were exploited.

But many Tibetans accuse officials of repressing their religion and eroding their culture, adding that natural resources are exploited to benefit China’s ethnic Han majority at the expense of the environment.

Yu’s other remarks stressed the importance of economic development and the construction of electric power lines. [Source]

Since 2009, over 140 Tibetans have self-immolated in protest as religious and cultural restrictions have tightened in Tibetan regions of China. Authorities in Tibetan regions have also been encouraging patriotism in the religious community, and making religious institutions a key venue for the dissemination of Party propaganda.

As Party officials warn of foreign influence on Tibetan religion, they have also made recent moves to directly oversee Tibetan religiosity, vowing to name the reincarnated successor of the exiled Dalai Lama, and last month allowing their controversial pick of the Panchen Lama to revive a tantric ceremony not held in Tibet for 50 years. Meanwhile, rights groups last month criticized Beijing for the demolition of residences at Larung Gar in Sichuan, one of the largest Tibetan Buddhist centers in the world.

At The New York Times, Luo Siling interviews Chinese writer Jianglin Li, author of the upcoming book “Tibetan Agony: Lhasa 1959” on the failed uprising that led to the Dalai Lama’s flight to India. While the Chinese government cautions against foreign infiltration in Tibet, Li points out that many Tibetans still see the Chinese government as a foreign occupying force:

You’ve drawn parallels between the killings in Lhasa in 1959 and the 1989 military crackdown on pro-democracy protests in Beijing.

China was better able to cover up its actions in Lhasa in 1959, before the advent of instantaneous global media coverage, but the two have much in common. In both, the Chinese Communists used military might to crush popular uprisings, and both involved egregious massacres of civilians. But for Tibetans, what sets the Lhasa massacre apart is their bitter sense of China as a foreign occupying power. The Tibetans were subjugated by force, and they are still protesting today. [Source]

As officials attempt to regulate religion in troubled ethnic minority regions, they have also been cracking down on Christianity as it continues to spread rapidly in China. However, reports in 2013 suggested that some officials in Tibetan regions were allowing Christian missionary activity, apparently preferring its potential to erode the influence of Tibetan Buddhism.

For more on official claims of foreign hostility, Tibet, or religion, see prior CDT coverage. For a look at how degrees of cultural and religious repression vary between Tibetan regions of China, see a recent article from The Economist.