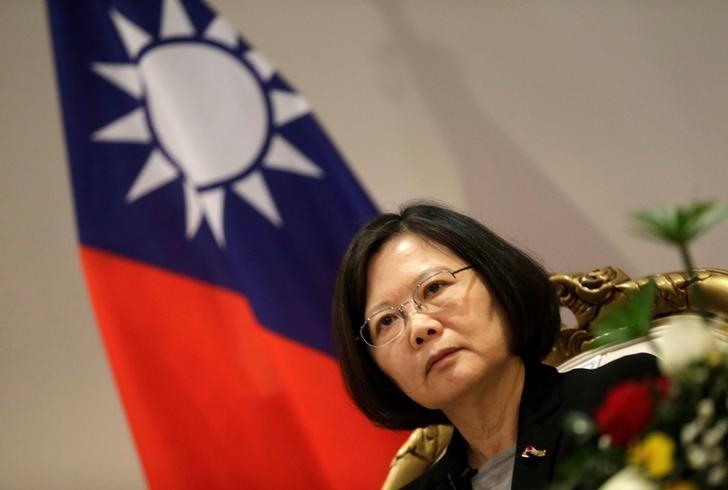 In what observers see as a win for China, Taiwan’s leader Tsai Ing-wen resigned this weekend as leader of the independence-leaning Democratic Progressive Party (DPP) after her party suffered major midterm election losses to the pro-China Kuomintang party (KMT). Tsai’s predecessor, Ma Ying-jeou of the KMT, presided during the Sunflower Movement, which saw mass protests against the administration’s pro-Beijing trade stance. Ma also had a historic 2015 meeting with Xi Jinping in Singapore, which was followed by the launch of a cross-Strait hotline that has gone cold following Tsai’s election. Since then, Beijing has continued to exert economic and political pressure on Taiwan, including by successfully pressuring international airlines to list Taiwan as part of China, conducting military drills, and pressuring its few remaining allies to sever diplomatic ties, most recently with Panama, Burkina Faso, and El Salvador. At The New York Times, Chris Horton reports on the midterm losses:

Shortly after it became apparent that the D.P.P. would lose crucial mayoral races, Ms. Tsai resigned her position as party leader, raising the possibility that she would be challenged for her party’s nomination for the presidential election in January 2020.

“As this party’s chair, I take full responsibility for the outcome of today’s local elections,” she said at a hastily assembled news conference at D.P.P. headquarters in Taipei. “People believe in democratic values — today democracy taught us a lesson.”

Opposition Kuomintang mayoral candidates won in Taiwan’s three largest cities — New Taipei City, Taichung and Kaohsiung. The Kaohsiung contest was especially stinging for the D.P.P., which has held the mayor’s office for 20 years and considered the southern city a political stronghold.

Han Kuo-yu, the Kuomintang’s candidate for mayor in Kaohsiung, emerged as the story of the election, defeating his D.P.P. opponent, Chen Chi-mai, who at the outset of the election campaign had been expected to win easily.

[…] Mayors in Taiwan are similar in stature to governors in the United States, and the Kuomintang mayors offer potential new dialogue partners for Beijing, which refuses to engage with Ms. Tsai and could use them to further isolate her and increase China’s involvement in Taiwan politics. [Source]

At VOA, Ralph Jennings reports further on why voters shifted allegiances, and how electoral defeats may galvanize the DPP to engage with the Mainland:

Some voters believe Tsai hasn’t done enough to lift Taiwan’s economy despite data that points to improvement, said Raymond Wu, managing director of political risk consultancy e-telligence in Taipei. Unemployment has fallen to 3.76 percent during Tsai’s term and the economy is forecast to grow 2.68 percent this year.

Others are turned off by the ruling party because it stands by statements and actions that others find problematic, said Gratiana Jung, senior political researcher with the Yuanta-Polaris Research Institute think tank in Taipei. “The elections are not just local, they’re about governing style,” Jung said. “There are people who have criticized the government’s way of communicating as being too arrogant.”

[…] Voters expressed themselves Saturday in part because they want Taiwan’s government to engage China, though not necessarily on Beijing’s terms, said Chao Chien-min, dean of the social sciences college at Chinese Cultural University in Taipei.

[…] “The public wants you to go accept negotiations with mainland China so previous relations, for example the 20 agreements, can keep being executed, but you need to find your own way of doing it,” Chao said. “It doesn’t have to be the 1992 Consensus. You can find your own golden key.” [Source]

At Bloomberg, Samson Ellis and Debby Wu caution that the DPP’s electoral defeat does not necessarily mean that Taiwanese voters desire closer ties with China:

“This result demands a response from Tsai, and the obvious change would be to emphasize the DPP’s strengths and the things that got Tsai in,” said Jonathan Sullivan, director of Nottingham University’s China Policy Institute. “Tsai has made a liberal, progressive society a big part of her appeals to the rest of the world to support Taiwan in juxtaposition to an increasingly repressive China.”

[…] By most economic metrics, Tsai hasn’t performed badly as president. The economy has grown faster than three percent for most of the past year, the benchmark Taiex index traded above 10,000 points for much of 2018 and unemployment is at its lowest since the 1990s. And while wage growth remains slow, it has grown more rapidly under Tsai than under her predecessor Ma Ying-jeou of the KMT.

Still, Tsai’s caution regarding key domestic issues such as labor reforms and same-sex marriage — rather than her dealings with China — were seen as key causes for the DPP’s defeat. […]

[…] “The elections this time did not have much to do with unification with China or Taiwan independence,” said Austin Wang, a political scientist at University of Nevada, Las Vegas. “What voters cared about was penalizing the DPP and Tsai Ing-wen.”

Reuters’ Ben Blanchard and Yimou Lee round up Beijing’s responses:

The official China Daily said in an editorial Tsai had ignored Beijing’s “cooperative stance” and forced relations into a deadlock, and that “her separatist stance has lost her the support of the people on the island”.

“Cross-Straits communication and cooperation between local governments are expected to be strengthened as a result of the election, which will bring more opportunities and help deepen mutual understanding,” it wrote.

The Kuomintang has sent delegations to China since Tsai took office, where they have been warmly received, and that contact is now likely to increase.

Hung Mong-kai, a Kuomintang spokesman, said he was “certain” there would now be more interaction with China.

[…] China has done little to hide its glee at the DPP’s poor showing.

The KMT’s electoral gains may now grant it even greater support from Beijing as Taipei nears the 2020 presidential election. Kelly Olsen at CNBC has more:

[…] [Sean] King [senior vice president at Park Strategies] said he expects China to reach out to KMT politicians ahead of Taiwan’s next presidential vote in early 2020.

[…] “The results were a major comeback for the KMT party, which began a process of intra-party reformation after losing the presidential election in 2016,” the Eurasia Group risk consultancy said in an analysis dated Sunday. “Beijing will view the results of this election as a solid endorsement of its pressure campaign against the DPP.”

Eurasia Group added that it sees Tsai — who was technically not on the ballot — as the biggest political loser of the weekend elections, with the DPP unlikely to back her for a second term in hopes that voters will accept someone else. [Source]

Additionally, in a blow to a 2015 Supreme Court ruling which set Taiwan up to become the first Asian country to legalize gay marriage, the AP reports that Taiwanese voters have green-lighted a referendum opposing same-sex marriage, and rejected changing its Olympic team name from Chinese Taipei to Taiwan. The Guardian, citing various news agencies, reports further on the same-sex marriage referendum:

The vote on Saturday, organised by Christian groups that make up about 5% of Taiwan’s population and advocates of the traditional Chinese family structure, contradicts a May 2017 constitutional court ruling. Justices told legislators then to make same-sex marriage legal within two years, a first for Asia, where religion and conservative governments normally keep the bans in place.

Although the ballot is advisory only, it is expected to frustrate lawmakers mindful of public opinion as they face the court deadline next year. Many legislators will stand for re-election in 2020.

[…] Courts will still consider local marriage-licensing offices in violation of the law if they refuse same-sex couples until May 2019, a Ministry of Justice spokesperson said last week.

[…] Voters approved a separate measure on Saturday calling for a “different process” to protect same-sex unions. It is viewed as an alternative to using the civil code. A third initiative, also approved, asked that schools avoid teaching LGBT “education”. [Source]

The New York Times’ Chris Horton described how the supporters of the referendum promoted misinformation to bolster their agenda:

[…] The campaign was characterized by misinformation, the bulk of which was spread online, including messages warning of an AIDS epidemic and low birthrates, or that educating students about different sexual orientations would influence their sexual choices.

The Marriage Equality Coalition Taiwan, an alliance of gay rights organizations, said the government had not done enough to push back against online misinformation that it said “frightened and manipulated” voters.

“As the government sat by and watched the dissemination of misinformation, L.G.B.T.Q.+ groups and civic organizations fought an uphill battle that was unfairly manipulated by money, power and politics,” the group said in a statement.

The government now has three months to present bills reflecting the referendum outcomes. While the vote against same-sex marriage does not affect the court ruling, it could make lawmakers more inclined to offer same-sex couples a separate civil union status rather than the same legal status that heterosexual married couples have. [Source]

In an op-ed for CNN, Zhang Baohui, a professor at Hong Kong’s Lingnan University, details how the midterms ultimately are a win for Beijing and a loss for Washington:

If the KMT once again returns to power, Beijing will reap a big win with clear implications for regional stability. The Taiwan Strait remains one of the most dangerous hotspots in East Asia. Re-stabilized cross-strait relations will no doubt tone down the likelihood of military conflicts, thereby removing a major security challenge for China.

The prospect of a possible KMT victory in the 2020 presidential election may also motivate Beijing to rekindle its vision for a “peaceful reunification” with Taiwan. For example, during Ma Ying-jeou’s reign, Beijing tried to complete a “peace treaty” between the two sides as a first step toward long-term political union.

[…] The DPP’s defeat and a possible bigger defeat in the 2020 presidential election also imply strategic setbacks for the Trump administration, which is pursuing a new China policy.

[…] The prospect of KMT winning the 2020 election will no doubt undermine Washington’s China policy. While various KMT governments in the past had very good relations with the US, the party’s traditional approach to cross-strait relations will make it less motivated to work with the US to contain a rising China. [Source]

Read more about Taiwan and Tsai Ing-wen’s tenure, via CDT.