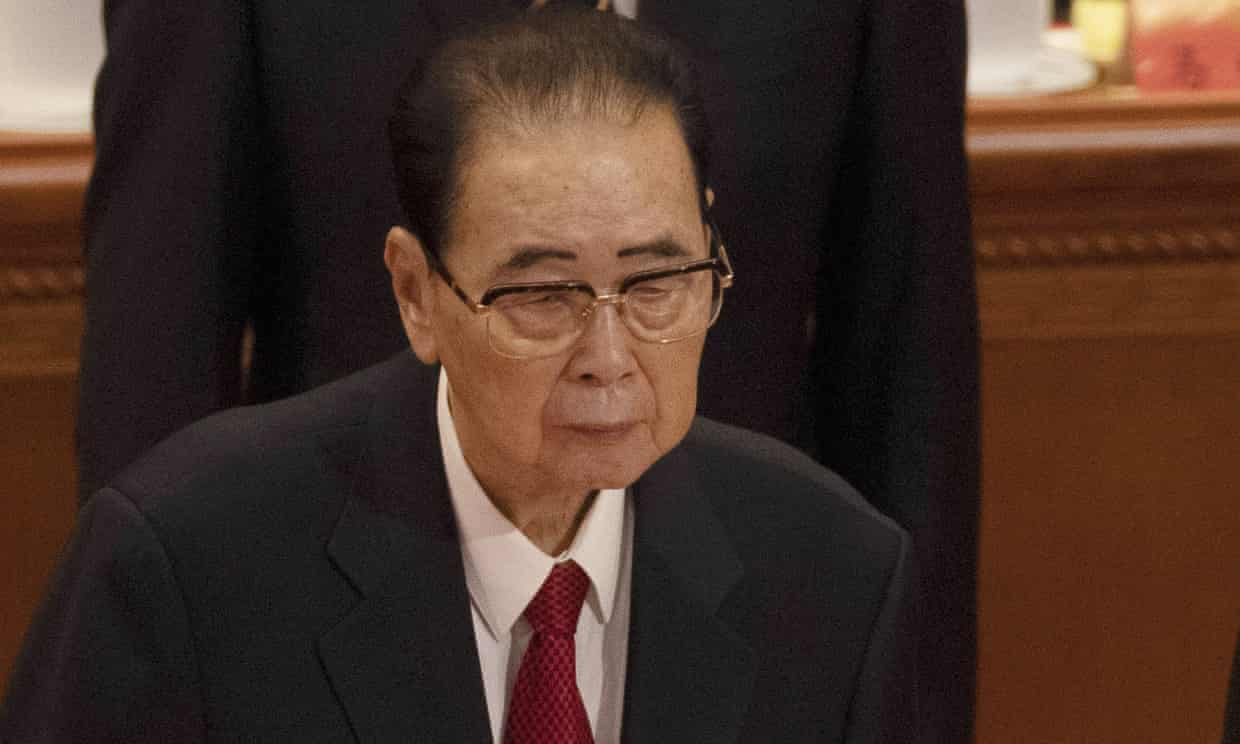 Xinhua has announced the death of former premier Li Peng at the age of 91 (age 90 according to the Western calendar):

#Breaking: Former Chinese premier Li Peng passed away in Beijing at the age of 91. pic.twitter.com/GSIenREP3n

Li was widely known as the “Butcher of Beijing” after he declared martial law during protests in Beijing in 1989, leading to the violent military crackdown on June 4. A diary purported to be kept by Li in May-June 1989 asserted that Deng made the final decision to order troops into Tiananmen Square, but Li was reviled by protesters and their supporters for his hardline stance against the protests and against political and economic reform more generally. Erik Eckholm and Chris Buckley write about Li’s life and career for The New York Times:

With his unwavering prosecution of the crackdown that had been sought by Deng and other elders, Mr. Li might well have assumed that he would be given the top job of party general secretary. But Deng, who had shrewdly pulled strings in secret, apparently concluded that Mr. Li was too unpopular at home and abroad to help the country recover from Tiananmen Square. He also may have suspected that Mr. Li would be too slow to unleash the economy.

[…] “Li Peng was the fall guy for Tiananmen, and that’s why he didn’t get the general secretary job,” Rod MacFarquhar, an expert on Chinese politics at Harvard, had said of Mr. Li. (Mr. MacFarquhar died in February.)

Bao Tong, who was a senior aide to Mr. Zhao, the party’s general secretary in 1989, said that Mr. Li would be remembered for two controversial deeds: helping extinguish the pro-democracy protests and vigorously supporting construction of the Three Gorges Dam. But Mr. Bao, who was ousted in 1989, said Mr. Li’s role in the Tiananmen crackdown was as a loyal adjunct to Deng.

“He was a soldier for Deng Xiaoping, a pawn in a chess game,” Mr. Bao said by telephone on Tuesday from his home in Beijing. “Some people believe that June 4 was the outcome of him misleading Deng Xiaoping, and he led Deng Xiaoping into making mistakes. But I think that’s overestimating Li Peng. He was following Deng Xiaoping.” [Source]

At the Washington Post, Emily Rauhala recounts Li’s role in the June 4 crackdown and the responses to it:

What happened next is still debated — and may be forever. According to the “Tiananmen papers” — a collection of documents leaked by an unknown Chinese source and vetted and published by U.S. China scholars in 2001 — at a June meeting of top leaders, Mr. Li made a case for clearing the square.

[…] The next day, troops advanced. For his role as the face of the massacre that followed, Mr. Li is reviled by survivors, witnesses and many ordinary Chinese, but over the decades he was protected and promoted by a party unwilling to revisit the decision to use force against Chinese civilians.

The official verdict on Tiananmen is that what happened was necessary — to criticize Mr. Li would be to criticize the party. China scrubbed the incident from textbooks. Web searches for “Tiananmen Square” and “6/4” are censored.

“It’s impossible to divorce Li Peng’s legacy from his role in the Tiananmen Square crackdown,” said Jude Blanchette, a scholar of Chinese politics and author of the 2018 book “Under the Red Flag: The Battle for the Soul of the Communist Party in a Reforming China.” “When it came time to decide the future direction of China, Li chose the party’s security over the people’s freedom.” [Source]

Li Peng tried — w/o success, as obituary headlines make clear — to improve his image at home & abroad. One example: He wore a Mao suit to declare martial law in 1989 (see above) but wore a western suit, striped tie, & smile to announce lifting of martial law in January 1990 ⤵️ pic.twitter.com/XtrfRQjay0

As an energy official, Li also championed the controversial Three Gorges Dam project and was later rumored to be linked to accounts of meddling in the Three Gorges Corporation, which itself was accused of graft. Michael Martina and Tony Munroe report on Li’s role in the Three Gorges Project for Reuters:

A hydropower engineer by training, Li rose through the ranks as an energy official. He was a champion of the Three Gorges Dam project on the Yangtze river, a massive feat of engineering that became part of his legacy.

In 1994, as premier, he oversaw groundbreaking on the dam, waxing poetic in a song he included in his diaries published in 2003: “The huge wheel whirls, its power boundless. The achievement is now, and the benefits for a thousand years.”

But the 185-meter (607 feet) dam also has been one of China’s most expensive and controversial projects, submerging villages, displacing millions and disrupting ecosystems.

The dam project became a lightning rod for what critics saw as China’s growth-at-all-costs economic model, coming in billions of dollars over budget, and was later linked to embezzlement and nepotism scandals, according to the national audit office. [Source]

Li passed on his power industry and Party credentials to his children; his son Li Xiaopeng is currently minister of transportation while his daughter, Li Xiaolin, has held powerful positions in the energy industry and has been embroiled in financial scandals, including being named in the Panama Papers.

On Twitter, many lamented that Li died before he had an opportunity to be brought to justice for his role in the June 4 crackdown:

I think it is a shame to #China and the world that #TiananmenMassacre butcher #lipeng was not brought to justice b4 he died.

One of my liberal Chinese friends used to think Beijing would “overturn the verdict” on Tiananmen Massacre after Li Peng’s death. But the Chinese government today is even more repressive than it has been in decades. https://t.co/Em25Rf2t47

Li Peng died. He was an asshole. Now he is a dead asshole.