Drawing the News: Sandy, Sparta and Beyond 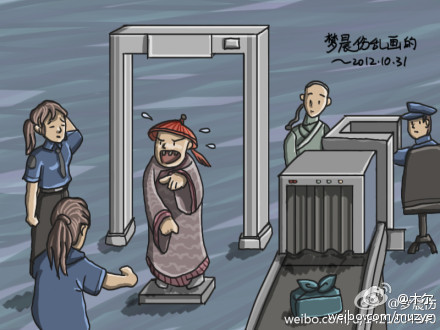 This week, online cartoonists satirize CCTV coverage of Hurricane Sandy, “new” invasive security checks at a Guangdong airport and the restrictions on Beijingers in anticipation of “Sparta,” i.e. the 18th Party Congress.

Artist Badiucao imagines an army of tankmen standing up to a mobile PX factory. The expansion of a petrochemical factory in Ningbo has been postponed following massive protests, but residents remain concerned that the project will still go through.

President Obama salutes CCTV reporters in the midst of Hurricane Sandy. The official news broadcaster has come under scrutiny for covering Sandy extensively but ignoring the Ningbo protests. “All leaders, please rest assured that all of your families in the U.S. are safe. The Democratic Party will emerge victorious from the flood!”

A rumor spread on Weibo this week that security at the Guangzhou Baiyun Airport is now examining passengers’ crotches. Airport officials say the rumor is false: the Guangzhou Daily reports the practice has in fact already been in use for some time and that security agents do not “use force” in their examinations [zh]. In this cartoon, an exasperated Qing-era eunuch yells at security agents to back off. His red hat and robe are a dead giveaway, but he still can’t bear the reminder of his long-lost jewels.

As Beijing locks down for the 18th Party Congress, residents have found they can’t buy fruit knives, watch the BBC in fancy hotels or roll down taxi windows. What goes on at the congress itself will be a mystery to all but an elite few.

The Beijing bureau of Japan’s Asahi Shimbun has a penchant for cheeky Weibo posts. In this interpretation of the 2008 Beijing Olympics logo, the iconic athlete wears the red armband of a security volunteer. The five Olympic rings have been expanded to seven, one for each member of the future Politburo Standing Committee.