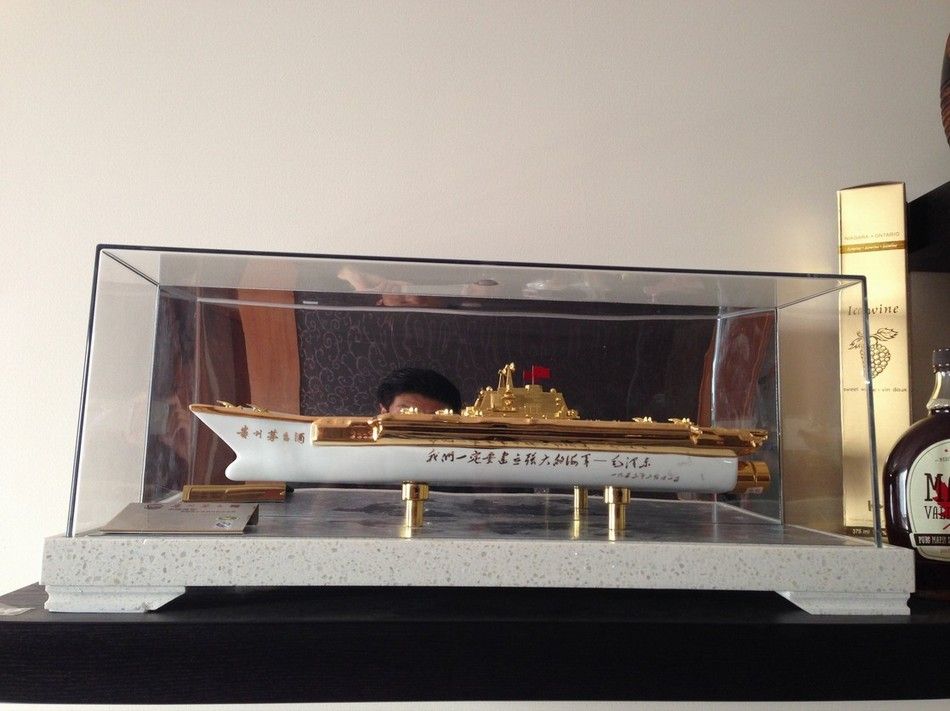 Bottle of Moutai liquor in the shape of China’s aircraft carrier. (大鹏看天下/Weibo)

Sales of Moutai liquor are down since Xi Jinping imposed austerity measures on public spending last year. The luxury grain alcohol, produced by state-owned Kweichow Moutai Co. Ltd., can cost US$600 per bottle, and is “an omnipresent intoxicant at official banquets,” in the words of New York Times reporter Andrew Jacobs. Two truckfuls of Moutai were confiscated from former PLA Lt. General Gu Junshan last January, who is currently under investigation for corruption.

But Moutai is not giving up its brand so easily. Weibo Big V 大鹏看天下 (“Roc Sees the World”) spotted new packaging for the liquor that combines indulgence with military pride:

大鹏看天下: The latest high-tech product from the Moutai Group: a 24-karat gold special edition Chinese naval aircraft carrier commemorative liquor. Each bottle weighs about one and a half pounds and contains 53% alcohol by volume! The bottle is the aircraft carrier, the aircraft carrier is the bottle. It comes in a solid aluminum alloy box and a deluxe crystal case! When our soldiers drink this, their aim will improve dramatically and their combat capacity will double. They will surely wipe out the Japanese invaders in one fell swoop!

This post has been censored on Weibo, as documented by FreeWeibo.

Along with his campaigns against corruption and for frugality, the Xi administration is asserting China’s claim to the disputed Diaoyu Islands, also claimed by Japan and Taiwan. In November, the Global Times ran photos of sailors standing on the deck of the Liaoning aircraft carrier to spell out “The Chinese dream, the dream of a strong military.” A second aircraft carrier is apparently under construction in the northern port city of Dalian. Roc Sees the World naturally assumes this bottle of Moutai is made to steel soldiers for battle against Japan, so often the enemy of choice.