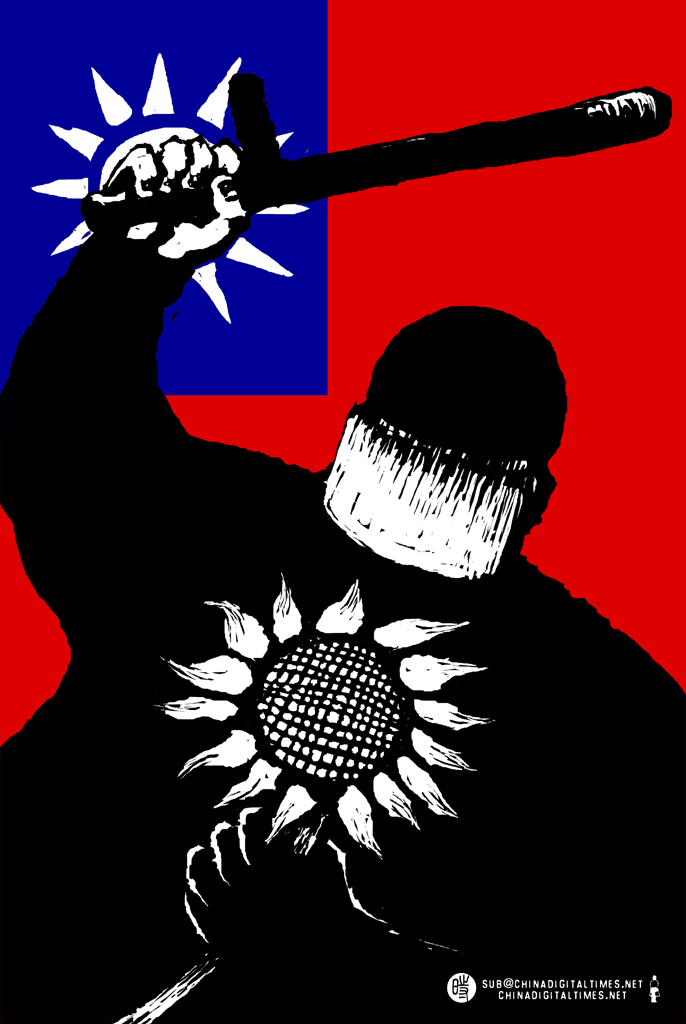 A roundup of online political cartoons from the past week. Click any image to launch the slideshow view.

The Cross-Strait Service Trade Agreement (CSSTA) is a follow up to the Economic Cooperation Framework Agreement (ECFA), signed in 2010 (also amid large-scale protests) and seen as the most significant cross-strait agreement ever. With many in Taiwan already nervous about Beijing’s increasing influence on the self-governed island, opponents of the CSSTA are concerned that the agreement would allow mainland companies to seize control of Taiwan’s service industries, even though the bilateral agreement opens more mainland sectors up to Taiwanese investment. 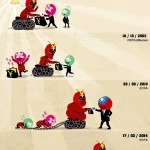 China, perched atop an armored vehicle, works its way towards regional economic integration. The first frame represents the Mainland and Hong Kong Closer Economic Partnership Arrangement, signed between Beijing and semi-autonomous Hong Kong in June of 2003. Next, as Hong Kong reaps the initial economic benefits, Macao signs a similar agreement months later. In the third frame, Hong Kong and Macao are shackled, kowtowing to an increasingly power-heavy Beijing, as Taiwan agrees to the ECFA. Finally, picketers restrain Taiwan from grabbing a final briefcase, representing the CSSTA. For translations of Hong Kong Internet-users warning Taiwan not to “become the next Hong Kong,” see a post from Global Voices. (Ah Tu 阿涂/Facebook) 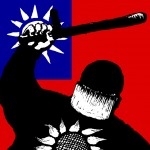 “Sunflower Student Movement” (太阳花学运) has become a popular moniker for Taiwan’s anti-CSSTA mobilization, and student protesters have held been holding the iconic dicots as “symbols of hope.” After protests escalated on March 23 when as many as 1,000 more protesters gathered outside nearby cabinet offices, many were injured in skirmishes with riot police.  (Badiucao 巴丢草 for CDT)

While sleeping in a tent during a protest against local government land grabs in Pingdu, Shandong on March 21, one farmer died and two others were injured after their tent caught fire. A report from the Global Times notes that villagers reported their suspicion of arson, and claimed that someone had poured gasoline on the tent. (Mengchenshang 梦晨伤/Weibo)

“My conscience aches! But I swear, we didn’t do this!” Standing on a patch of earth marked “Requisition Land” a man looks on as a tent and its occupants are engulfed in flames. Dressed as a Japanese soldier, this draws a parallel to revisionist Japanese denials of the Nanking Massacre—a source of much rage in China. (Dashixiong 大尸凶)

With Crimea now a sovereign state under the Russian Federation after a controversial referendum, China’s government censors have forbidden any media discussion of China’s own sovereignty issues, and Global Times editor Hu Xijin reprimanded those of his compatriots that did dare to make those types of comparisons (Lao Xiao 老肖/Weibo).