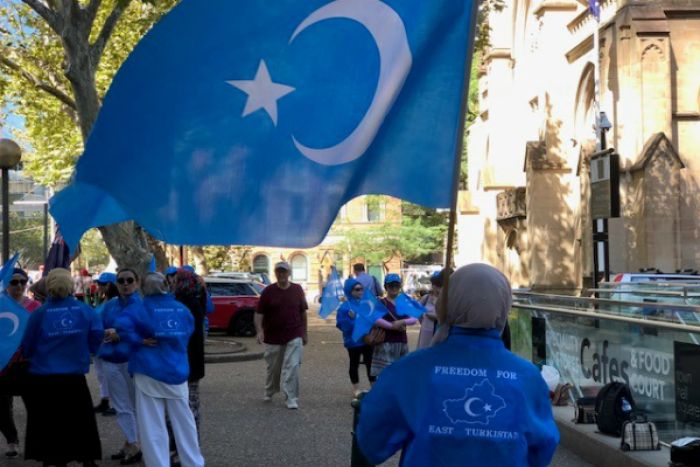 As a long-running security crackdown by the Chinese government continues to target members of the Uyghur ethnic group living both inside and outside of China, Uyghurs last week protested in major international cities against the increasingly aggressive security and political reeducation campaign. At the AP, Gerry Shih reports:

Overseas Uighur activists said they planned demonstrations Thursday in 14 countries in total, including the U.S., Australia and Turkey.

More than a hundred Uighur protesters gathered at a plaza near the United Nations in New York to call on the body to protect their culture against Chinese government efforts to assimilate the Turkic-speaking people. Elsewhere, hundreds of Uighur women on Istanbul’s Istiklal Street and in front of Sydney Town Hall chanted and waved blue flags, the separatist symbol for a proposed independent state called East Turkistan.

[…] “Can you imagine a place where millions are taken into camps without the involvement of courts?” said Seyit Tumturk, who helped organize the Istanbul rally. […] [Source]

Shih continues to note that Tumturk is working with various governments to establish a new overseas political advocacy group which would push for an independent Uyghur state allied with Turkey and Central Asian governments. The new group would distance itself from the World Uyghur Congress, a Germany-based, partially U.S. government-funded organization that despite calling for only greater ethnic and cultural autonomy inside of China is considered a terrorist organization by Beijing. China last month publicly opposed Interpol’s lifting of a “red notice” on WUC President Dolkun Isa. Shih has been leading AP’s frontline reporting on the situation in Xinjiang and on Chinese efforts to pressure Uyghurs abroad since last year. In January, he discussed his work with Jeremy Goldkorn and Kaiser Kuo at SupChina’s Sinica podcast.

The ongoing security crackdown in Xinjiang, originally launched as a nationwide, yearlong campaign in May 2014 but quickly extended, has mostly targeted Xinjiang and the Uyghur ethnic minority native to the region. Rights advocates and overseas Uyghur groups blame the escalating campaign and its focus on Uyghurs for exacerbating ethnic tensions in Xinjiang. So far, the crackdown has included religious fasting bans, local and region-wide rules against “extremist behavior” including wearing veils or beards, propaganda campaigns promoting ethnic harmony, a ban on “extreme” Islamic baby names, a biometric data collection system, and a system of political re-education camps filled with Uyghurs. Moderate voices for reform in the region have been dealt with harshly, which some scholars see as part of a “self-fulfilling prophecy” of increased militancy in Xinjiang. Amid the campaign, in 2016 Chen Quanguo was installed as Party Secretary of Xinjiang, where he used methods from his earlier work in Tibet to utilize members of the local ethnic minority to police its own people, and moved from the “carrots and sticks” tactics of his predecessor to a ratio much heavier on the latter. According to Xinjiang specialist Adrian Zenz, “Xinjiang has become perhaps the most heavily policed region on the planet.”

At the Australian Broadcasting Corporation, Jennine Khalik and Lily Mayers report on female-led protests in Sydney and Adelaide:

Mamtimin Ala, president of the Australian Uighur Association, said the usually quiet community feared speaking out because of reprisals against family members back home.

[…] One woman at the Sydney protest, who asked to remain anonymous, said she could not contact her family because of consequences they would face from Chinese authorities.

“I can’t call my sisters … every call from overseas, [the] Chinese Government listens to every single call,” she said.

“But when they finish the talk, someone comes from the Government, and they come into their house, ask ‘Why is your sister, brother, calling you? What did you say to them?’.

“They make them more scared. They make [a] scary environment.

As the crackdown in Xinjiang has intensified over recent years, China has increased its efforts to pressure Uyghurs living abroad. Radio Free Asia this month reported that Dolkun Isa, the WUC president who had his Interpol “red notice” lifted earlier this month, cited the warrant as another example of Beijing’s attempting to silence critics abroad. Foreign Policy recently reported on increasing surveillance and intimidation efforts, noting that Uyghurs living in France—some of them naturalized citizens—have been receiving demands for personal information from Chinese police. The Guardian last week reported on demands from Pakistani men for the release of their Uyghur spouses, at least 50 of whom are believed to be held in re-education camps in Xinjiang. RFA last week reported that a teenage boy held un one such camp for attempting to travel abroad had died in custody.

Meanwhile, in effort to silence reporting on Xinjiang by overseas Uyghur journalists, Chinese police and security agents have for years reportedly been harassing and imprisoning their relatives in Xinjiang. This month, RFA reported that five employees had relatives detained. Amnesty International tells the story of Gulchehra Hoja, one of the RFA journalists, and her quest to secure the release of her family members—including her septuagenarian grandmother:

She learned from family friends that her parents had been caught up in a sweep of arrests targeting some 20 members of her family. Now Gulchehra’s mother, Qimangul Zikri, has been released, but her father remains under guard at a hospital, and many of her other family members are still missing.

[…] The Chinese government has been harassing Gulchehra’s family for years because of her journalism for Radio Free Asia. She is one of six Washington-based employees of the broadcaster’s Uighur service whose families have been targeted by the Chinese government.

In late September, police also arrested Gulchehra’s brother, Kaisar Keyum, and told their mother it was because of Gulchehra’s reporting. Qimangul had been hoping for news on her son when she too was arrested.

[…] She thinks about bringing her parents to the USA but her mother thinks that would be impossible. “Even a fly cannot get out of Xinjiang now,” she told her daughter.

Gulchehra feels she has to continue working to get her family released and to speak out in the meantime. “If this is how they treat a woman in her seventies, what is happening to my brother?” she asked. “Even if they are all set free, that fear still lives with me,” she said. “When will the nightmare start again? What can I do? Who can I talk to? Who is going to care about us?” [Source]

Earlier this year, state media suggested that the security crackdown in Xinjiang would continue to intensify over the next five years. Last week at the National People’s Congress political meetings in Beijing, the deputy party secretary of Xinjiang praised the ongoing campaign and vowed its continuation. The South China Morning Post’s Phila Siu reports:

Speaking at the Xinjiang delegation meeting during the National People’s Congress in Beijing, the deputy party chief of one of China’s most repressive areas said the fight against separatists was “intense” and the government would not let its guard down.

“Through the efforts that the people of Xinjiang have made, the region’s overall situation has been stable. The people’s sense of security has grown,” Zhu [Hailun] said. “A stable situation benefits Xinjiang’s economy and leads the people to better lives.”

[…] Zhu warned that the fight against separatists was “persistent, complicated, sharp and at times very intense” but said the authorities were determined to ensure stability.

At the same meeting, Shohrat Zakir, chairman of the Xinjiang regional government, said more than 100 million tourists – both domestic and foreign travellers – had visited Xinjiang last year, up 32.4 per cent from 2016. [Source]