Xinhua reports that Xi’an has “basically” achieved “social clearance,” the end of community transmission of the coronavirus. Approximately 13 million people remain in lockdown, tens of thousands are spread across hundreds of quarantine centers, and thousands more have reportedly been deported to quarantine locations outside the city’s borders. The lockdown and its attendant effects have caused considerable hardship for many, especially the vulnerable and the elderly. At The Wall Street Journal, Liyan Qi reported on the Xi’an outbreak:

China’s Covid-19 count remains low in comparison with other countries, hovering at around 100 a day. In the past few days, about 90% of cases have been in Xi’an, the city of terracotta-warrior fame in China’s northwest, which has confirmed 1,758 total Covid-19 infections since Dec. 9, a high number for China. Most of the cases have been mild, officials said. No deaths related to Covid-19 have been reported anywhere in China in the past 11 months, including Xi’an.

[…] In recent days, local residents have circulated a document purporting to show that local officials are preparing to move anyone deemed to have been near an infected person—a vague definition that can mean someone in the same apartment complex—into quarantine centers outside the city. Xi’an officials said in a Monday briefing that the city was housing nearly 40,000 people in 387 quarantine centers.

[…] In Xi’an on New Year’s Day, Liu Guozhong, party chief of Shaanxi province, urged officials not to let down their guard. “Strict management of key venues mustn’t be relaxed,” he said, according to a statement on the provincial government website. [Source]

Residents have no control over whether they go to quarantine centers: “We [were] woke[n] up in the middle of the night by a knock on the door and told to pack up and leave, without further explanation.” Xi’an residents have dubbed the process “getting hauled off.” A widely shared poem on Weibo framed the Xi’an experience like this:

First, I hoped to escape lockdown

Later, I hoped to get out to buy food

Now, I only hope I’m not hauled off [Chinese]

Although tens of thousands of healthy individuals are in quarantine, not all of the infected have been able to find a bed. One father with a positive test called the pandemic control center, the police, the fire department, the local government services’ office, the street-level office of the Communist Party and his neighborhood committee begging to be quarantined, but to no avail. His entire family of six later tested positive.

Residents have gripes with the way the “social clearance” policy has been pursued. They say Xi’an officials are “plugging their ears to get to zero,” a play on the homophonous Chinese idiom “plugging one’s ears while stealing a bell,” i.e. sticking one’s head in the sand. Xi’an residents have been sharing this phrase to criticize authorities’ apparently haphazard, ad hoc response.

No one has died of coronavirus over the course of this latest outbreak in Xi’an. State media report that there is “no run on resources or understaffing” in Xi’an hospitals. Nonetheless, there have been a number of seemingly unnecessary medical tragedies triggered by the lockdown. On social media, one woman claimed that her father died from a heart attack because hospitals, concerned about possible coronavirus transmission, refused to admit him until it was too late. At The Washington Post, Christian Shepherd reported on a woman’s third-trimester miscarriage outside a hospital’s emergency care unit:

After feeling pain in her belly, the woman called an ambulance, according to an account from her niece posted Tuesday evening on the microblog Weibo. Without a negative coronavirus test, she had to wait outside emergency care for two hours until staffers relented when they saw that she was bleeding heavily.

But by then, the woman had miscarried, said the post from her niece, which was deleted after gaining nearly 6 million views. Neither woman was identified, and The Washington Post was unable to independently confirm details of the account. An employee of the hospital’s quality-of-care department who answered the phone Wednesday said the matter has been investigated and that an official statement would be released soon.

[…] Dozens of similar cries for help have appeared on Chinese social media in recent days. Another case involved an HIV patient who had a fever of up to 105.8 degrees Fahrenheit for 25 days but was turned away from multiple hospitals. He eventually received care after his family’s post went viral. [Source]

The deaths elicited online outrage. CDT Chinese has collected a number of comments posted to Weibo, a selection of which are translated below:

丁什么丁丁丁：Just this afternoon I saw someone say they’d lost their dad to a heart attack after the hospital delayed admitting him, and now there’s this woman who lost her baby. Is this pandemic prevention, or murder?

一团儿酸奶冰红茶精__：Please remind me, am I really living in the 21st century?

霸气芝士山楂草莓：Other illnesses, apart from COVID, aren’t illness. But then I think about that family of six getting infected, and it seems like they don’t care about COVID, either. So what do they care about?

低级俱乐部_official：Watch out for Biden playing the Xi’an card. [Chinese]

currently there are 1646 active cases & 21 are severe. it's a city of 12mil population and 20+ triple A hospitals.
but, social media is full of stories of people with emergency conditions being refused admission. a 8 months pregnant woman lost her baby and almost died because pic.twitter.com/cYCFq0vbQK

Hunger remains a problem—despite highly-publicized government efforts to feed the city. A viral video showing a bucket brigade-style grocery delivery to one neighborhood was met with derision by commenters who doubted the practical value of the aesthetically well-choreographed effort:

小琨琨来了呀： In a 5G era, they stubbornly insist on using Stone-Age methods like human-chain transportation. Apart from the fact that it’s tiring for the workers, I don’t see anything to praise here.

哎呀我摔倒辣：The greatest difference between humans and animals is the ability to use tools.

千里梦：They’re right next to the road, why don’t they just deliver it straight to the entrance? I don’t get it.

呼啦圈呼啦啦地转：How long is the prison sentence for using a hand-cart in Xi’an? [Chinese]

Complaints about food have been censored. When local residents flooded a regional television station’s livestream of a pandemic control conference with pleas for food, the comments section was shut down: 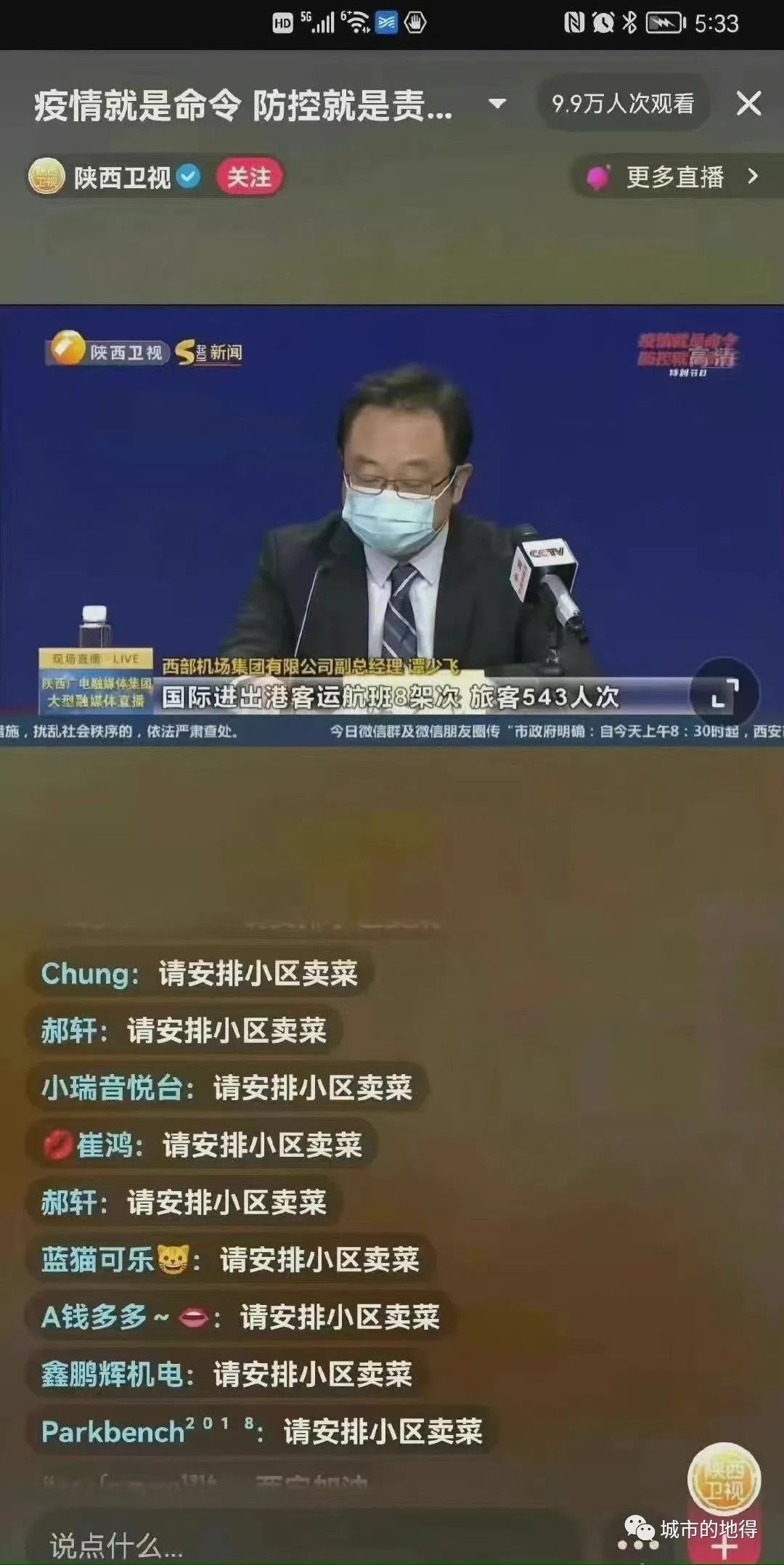 Every comment on the livestream reads: “Please organize neighborhood sales of groceries.” 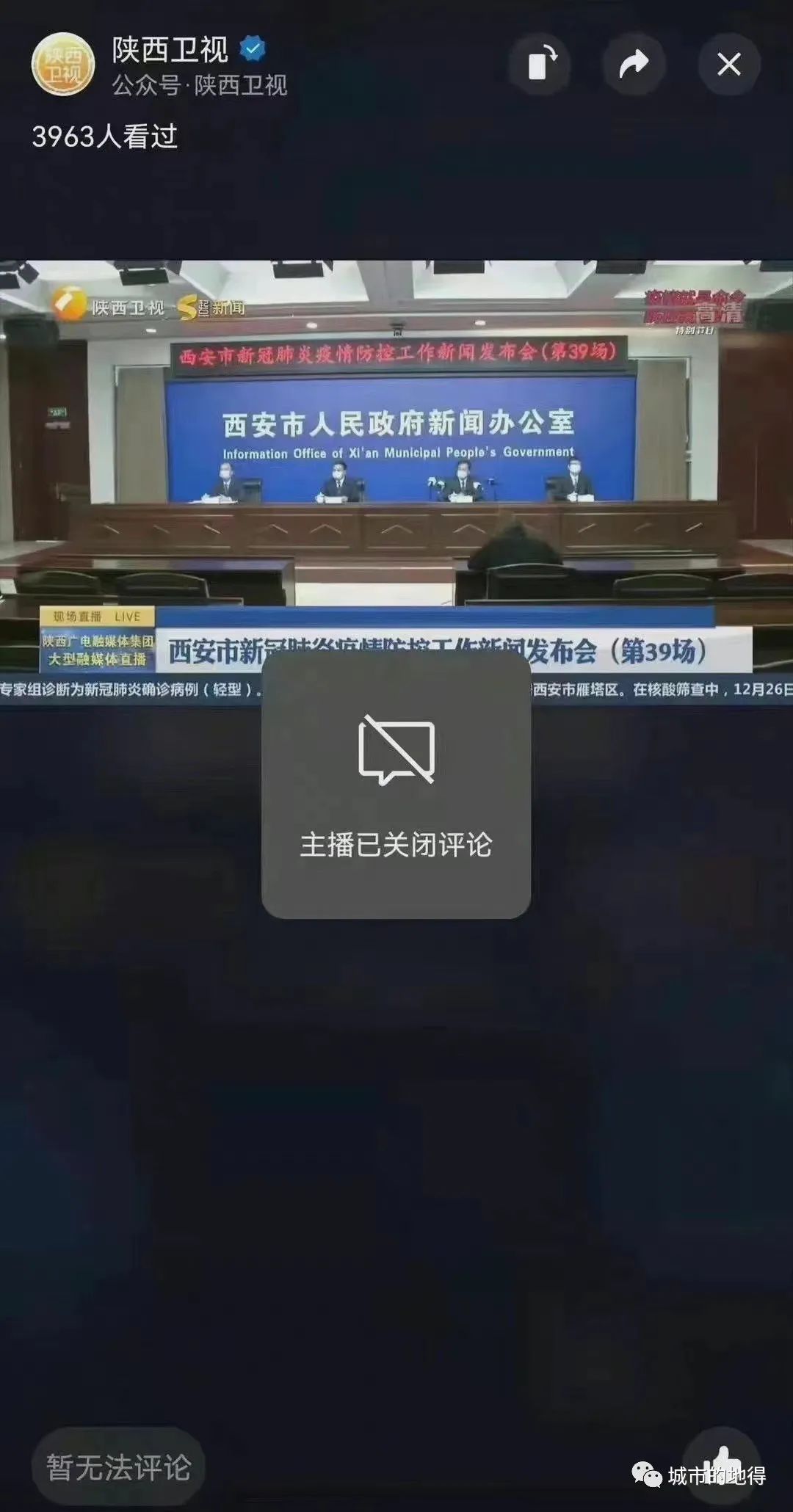 Comments were subsequently shut down.

When one hungry Xi’an resident left his neighborhood to purchase steamed buns, neighborhood security guards beat him and threw the buns on the ground, while screaming, “Are you trying to die?” Another online commentator found that a much-celebrated delivery of food had been sent directly to a neighborhood populated primarily by government officials and their families. At The Guardian, Helen Davidson reported on food shortages, bartering and housing issues:

Reports of food shortages in Xi’an have also flourished on social media despite promises by authorities to deliver supplies to homes, and claims of neighbours bartering cigarettes and personal belongings for food.

“I have only received free vegetables once so far, and one package per household,” said one resident. “The price of food in the city is very high, and there is no one to regulate it. There is no take-away service for daily necessities, and the errand fee is about 100 yuan ($15) before someone takes the order.”

[…] On Monday, Xi’an officials said the city had spent about $1m on assisting people in need, and had housed about 200 stranded people in temporary shelters. They also promised to set up hotlines and further assistance services. [Source]

Some of Xi’an’s poorest residents have embarked on epic feats of endurance to escape pandemic controls: one 31-year-old man hiked one hundred kilometers [60 miles] over eight days, until he was discovered by villagers and forcibly quarantined; another rode a share-bike 100 kilometers overnight in sub-freezing temperatures until he, too, was caught and fined 200 yuan [$31 U.S. dollars]; yet another man attempted to swim across a nearly half-mile-wide river, only to be trapped in the frigid waters for six hours until he was rescued by a village cadre and forcibly returned to Xi’an.

Police have on occasion employed punishments from a bygone era against pandemic-control violators. One Xi’an resident was forced to read a self-criticism on camera, a punishment that seems light in comparison to those who were illegally paraded, sometimes in cages, through the streets of a city in Guangxi province. For some, it evoked memories of Mao: “Super-reminiscent of that era.”

China’s highest officials have taken notice of the chaos. Two Xi’an Communist Party officials have been sacked and dozens more have been punished. The city officials responsible for Xi’an’s all-important health code app were also fired after the app crashed twice during the current outbreak.

to fending for themselves. If it works out, the centre takes the credit, if it doesn't, local officials are blamed and given the boot. 13/

In investigative journalist Jiang Xue’s “Ten Chang’an Days,” a recent account of pandemic control policy in Xi’an, she notes that the blind cruelty of the lockdown has done more harm than the virus: “I wanted to tell him: ‘In this world, no man is an island—the death of any individual is the death of us all. The virus hasn’t claimed any lives yet here in Xi’an, but lives have been lost due to other causes, that much seems probable.’” Will Jiang Xue face repercussions for her writings, as did Fang Fang, the author of Wuhan Diary? Such a possibility seems unlikely to deter her from speaking out. Caixin columnist Wang Heyan shared a now-censored 2015 profile in which Jiang Xue said: “I’m not a particularly brave person, but I can weigh my choices and decide what cost I’m willing to bear for the sake of freedom and independent expression.”

Editor’s note: This post has been edited to correct the translation of quotes that appear in the final paragraph.