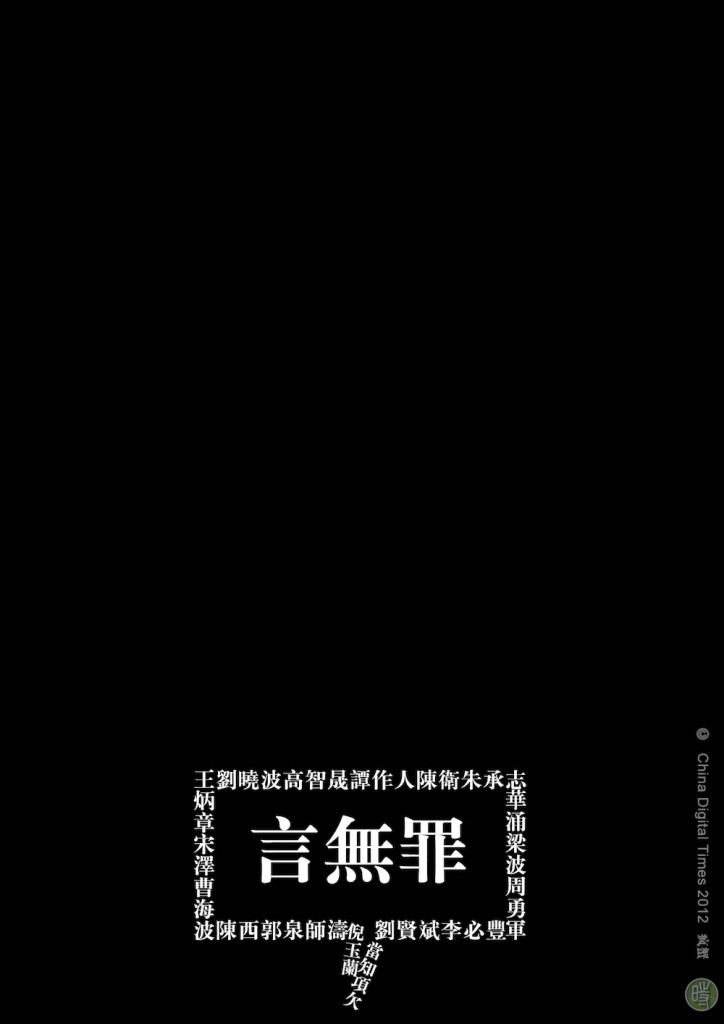 The CDT translation team strives to bring readers a diversity of voices. While much of our work focuses on documenting censorship in the media and online in our ongoing series Directives from the Ministry of Truth and Sensitive Words, we also translate commentary from Weibo users–much of it deleted and archived on FreeWeibo–as well as political cartoons, protest signs from Hong Kong, excerpts from a novel, and interviews with Tibetan refugees. Blog posts from established writers mingled with messages from “self-media” pioneers and ordinary Chinese citizens.

Some of the authors who are cited below, like Wang Lixiong and Kang Xia, express thoughtful fatalism about the current political system. But hope for the future infuses blog posts by film director Ai Xiaoming and others, while respect and tolerance for those different from themselves shine through Weibo posts on Han-Uyghur interactions and activist Feng Zhenghu’s diary of his three-month odyssey in Narita International Airport. We also shared the ingenuity of netizens behind the Great Firewall through the Word of the Week and our eBooks Decoding the Chinese Internet and Crazy Crab’s Chinese Dream.

We have selected some of our favorite translation posts from 2014 below. You can browse all of our posts here. We look forward to a new year sharing creative, thought-provoking, and hopeful Chinese voices with you.

“The governments of China and Japan will continue to fight, but the peoples of these nations will not be fooled–we will remain friends.”

In 2009, Feng Zhenghu spent 92 days in the arrivals terminal of Tokyo’s Narita Airport after Shanghai authorities refused him entry eight times. CDT will continue to translate his diary in 2015.

“We are here to liberate you,” they told the elders. The Han tried to explain what ‘liberate’ meant, but the elders didn’t know how to translate ‘liberate’ into Tibetan, let alone what the word meant.

In the summer of 2010, writer and filmmaker Tang Danhong and the young Tibetan translator Sangjey interviewed older Tibetan refugees in India, people who had fled their homes as the People’s Liberation Army entered Tibetan areas and slowly tightened Beijing’s grip. In Troubled Times, CDT translated interviews with three Tibetan refugees: Dollu, the only one in her family to make it out of Tibet; Kyisang, who escaped a Chinese prison; and Chagdoe Donyon, a guerilla fighter who was later trained by the CIA for missions into Tibet.

“In Taiwan, you can see all the problems; even the ones you can’t see, there are people who will help you see them.”

Li Chengpeng: The Taiwan You Can See

Li Chengpeng, the soccer commentator turned social critic, has paid for his outspokenness: in January 2013 he was warned not to speak at his book signing in Chengdu, and his Sina blog and Weibo accounts were deleted this summer. In “The Taiwan You Can See,” Li considers Taiwan’s ugly side, and why it is better to expose a country’s flaws than present a spotless facade.

Netizen Voices: “Why Not Call Them Chinese Terrorists?”

After the violent attack on the Kunming Railway Station on March 1, China’s state media warned that “the eastward expansion of Xinjiang terrorism is accelerating.” In response, Weibo users reflected on their personal interactions with Uyghurs, asking others to think carefully about grouping an entire ethnic group into the category of “terrorists.”

“The Internet is a place that does not distinguish between truth and fiction, yet at the same time clearly separates right from wrong.”

Wang Lixiong, husband of the Tibetan writer and activist Tsering Woeser, is an established author and intellectual in his own right. This excerpt from Wang’s latest novel, Reincarnation, reimagines the development of the same setting as his 2008 book China Tidal Wave. Wang was publishing Reincarnation chapter-by-chapter on his blog, but unfortunately his website is no longer available.

“Since Xi Jinping took over, why has the entire academic community felt so let down? Why have nearly all of them broken off from him? I say, this is because Xi Jinping is the bitter fruit of Mao Zedong’s 30 years of communism and Deng Xiaoping’s 30 years of crony capitalism.”

Detained in April on accusations of leaking state secrets, veteran journalist Gao Yu stood trial in November and is awaiting sentencing. In April 2013 she leaked the Chinese Communist Party internal communique known as “Document 9,” which warns of the dangers of “promoting Western constitutional democracy.” CDT translated Gao’s remarks from a seminar held in New York in October 2013 in which she asserts that Xi Jinping, far from being aligned with the “princelings” surrounding him in the central government, is maneuvering to establish his power independently of them.

“It felt like all my friends had died. I wanted to write 1,000 obituaries, but I knew that obituaries wouldn’t bring them back.”

A Eulogy for the Cenci Journalism Project

The volunteer-run Cenci Journalism Project translated a wide range of material from many different languages into Chinese. Cenci was abruptly shut down this July. Here, founder Kang Xia describes his experience building up the nonprofit, his pain in watching its harmonization, and his thanks to the countless volunteers that helped him realize his goal.

“Convert your grief into power; say everything you need to say; keep on walking the road you must travel.”

Ai Xiaoming: Thinking of My Friends in Prison

Ai Xiaoming is a documentary filmmaker, activist, and professor of modern Chinese literature at Sun Yat-Sen University. She posted this essay and photos to her blog [Chinese] on May 9, spurred by the detention of Pu Zhiqiang and others who attended a seminar about June 4th.

“Victory will not come walking towards me, I must myself walk towards victory!”

Signs of the Hong Kong Protests

CDT Chinese Highlights: Hot on the Chinternet This Week